Japanese company Logbar, famous for a ring-shaped gesture control device, has created ili, a wireless, wearable translation stick that supposedly lets you communicate in other languages, all without the use of an internet connection – similar to the idea of a Star Trek translator. 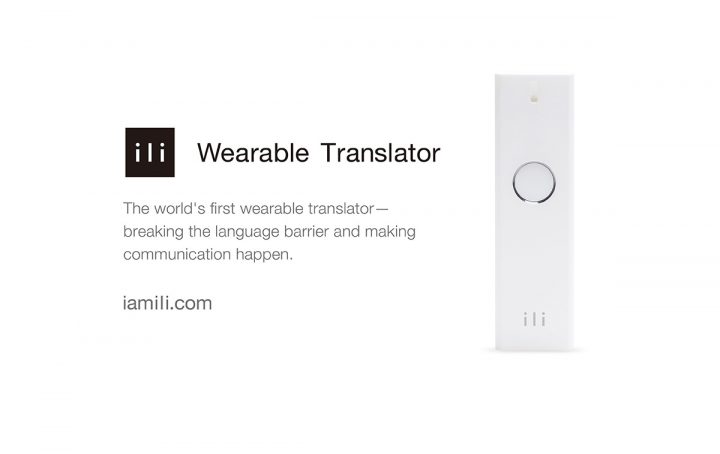 It’s a powerful concept – being able to travel the world, and go to foreign countries, all the while unrestricted by the traditional inability to speak more than one or two languages. Companies like Google have worked on the problem, taking advantage of their size and scope to generate some of the best machine-translated results to date.

Their system isn’t perfect, however – until fairly recently you had to be sitting on a computer or delicately typing into a smartphone. Things have improved on that front, but we’re still dependent on having a strong internet connection to do the grunt work. That poses problems if you happen to be traveling in another country, one where you don’t have a reasonable data plan.

ili was created, so we’re told, to fill that gap. It appears to be about the size of an old-fashioned pack of gum, or maybe the original iPod Shuffle, molded out of clean white plastic. Only a silver-ringed button, along with tiny speaker and microphone, mar the surface.

Its use is easy: press the button, speak your intent, and ili translates it into whatever language you’re targeting at the moment. Right now, it only works between English, Japanese, and Chinese (presumably Mandarin). A second edition will include translation for / between French, Thai, and Korean, while a third version adds Spanich, Italian, and Arabic to the list.

All of the translation comes included with the device, including, according to Logbar, a series of travel-specific dictionaries. At the end of the day you can plug your ili into a dock, which will both charge and updated the unit’s translation dictionaries and software.

The company says that ili will be ready sometime this summer, but they give no indications of shipping countries or an expected retail price.

If it works as well as Logbar claims, ili could become one of the fastest selling wearables we’ve ever seen. So far, however, there have been several claims made about the device – only without much proof to back them up. A video posted on the ili website just tells the story of a British man chasing down women on the streets of Japan and trying to kiss them – with help from the ili translator. It was a bit creepy – one woman managed to hit him with her bag before he let go.

Unfortunately, it’s hard to tell whether the machine was translating any of that in real time; video could have cut, or the pickup lines could have been pre-recorded – none of the Japanese text was translated back into English via the ili. If the company is successful – and that’s kind of a big if – this could be the brink of something very exciting for anyone who loves to travel or live in NYC.

The company plans to ship, or at least unveil more information – by sometime this summer; until them we’ll be busy over here doubting that it works while simultaneously hoping that it does).