Since the release of single sticks of 2GB of RAM I have enthusiastically grabbed a handful and attempted to put them in every Tablet PC and Ultra Mobile PC known to man! So in keeping with my theme I am on a RAMpage and not afraid of very much at all.

Here is the history: 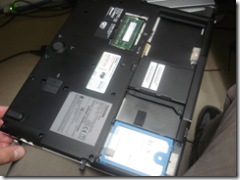 On this occasion the Patient is my latest device, the Toshiba R400. Before I tell you the results I better give credit where credit is due. This morning I had a visit from my close mate, Dr. Neil Roodyn, and part the reason was to see his Toshiba M400 and a pair of 2GB sticks of RAM he had sourced. Long story short, a couple of minutes later and four screws and one cover plate, we had 4GB of RAM inside his M400. You may have heard however that Windows does not see all four gigs so why bother you might ask. Well the why bother is very easy because on Neil’s M400 he was able to see 3.3GB of RAM – and that can’t be a bad thing. 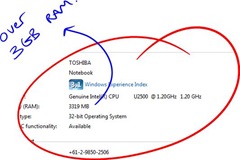 I was moved by this event to take some action of my own; staring at my R400 with 2996MB of RAM inside I questioned why I hadn’t tried the second 2gigs. The reason is simply that I followed the advise of one of my friends (not always smart) who had told me that Windows cannot see past 3GB. Having proved this to myself on the Sahara i440D I could see little reason to disprove what I knew – until Neil and his M400 that is. So as soon as we finished our chat, and all I could see was the back of Neil’s head I reached over to my RAM box, grabbed a new 2GB stick called RAMbo (believe it or not) and made my way to the R400.

On a previous upgrade of the R400 all I did was remove one of the 1GB sticks of RAM and placed a 2GB stick in its place. The RAM slot to do this is very accessible via the underbelly of the machine so it is literally a 2 minute task. The second RAM slot (which is actually the Primary Slot) is hidden under the keyboard and takes a little longer. So two screws and a cover plate later I had successfully reached the Primary RAM slot, which housed a single 1GB stick, and replaced it with a new RAMbo 2gig module. A quick shutdown and a rather rapid reboot and I new all was good! What was interesting was the “before and after” Windows Experience Index score. 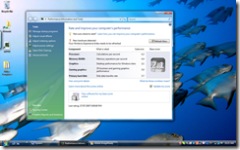 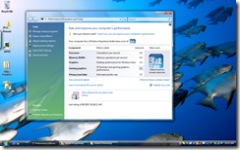