It’s not news that Apple is talking with cable operators and content providers about a new Apple TV capable of delivering Live TV and DVR like functionality.

We’ve heard about negotiations over, and over again, but as the last few minutes of Leverage turned into a pixellated muted mess on Time Warner Cable last night I couldn’t help but wish my Apple TV could replace the laggy, crash prone Cisco set top box that does all it can to interrupt the small amount of time I have to watch TV.

According to the Time Warner tech that installed it, the Cisco Explorer cable box I’m stuck with is the top of the line box, one normally reserved for Whole House service that comes with a Personal Solutions Advisor on call 24/7, likely to help you navigate the clunky user interface and explain away failed On Demand programming and poor picture quality with a soothing voice and a promise of improvements in the future. 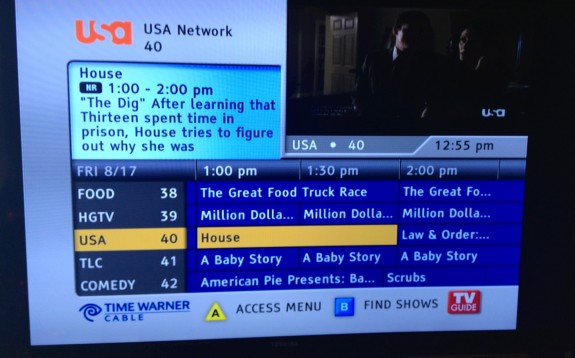 This is not the future of TV.

Many credit Apple with pushing Android phone designs from the Windows Phone and BlackBerry look a likes to the touch screen devices so many of us use. Similar comparisons exist in the tablet market BI (Before iPad) and AI (After iPad). While Apple wasn’t the first to make these gadgets it did a lot to convince users and companies that the old way didn’t cut it.

The NFL Preseason Live app for the iPad is one example of how the future of watching TV should be. For a fee I can watch any game I want in HD on my Apple TV, with AirPlay mirroring.

The games look great in HD, better than they do from Time Warner Cable on Sunday afternoon, when the picture is just as likely to pixellate as the Dolphins are to lose.

The Apple TV may still be a hobby to the company, but I’m more than ready for a cable box that doesn’t suck. Ultimately I wish Apple could deliver this over an INternet connection to cut out the need for the cable box altogether, but I’ll take what I can get.

I’ll take a better cable box from Google, Microsoft or even RIM, as long as it gives me better picture quality and a better user interface. I know there are some streaming solutions available for Xbox, but their all tied to specific cable operators. Last time I checked, last week, there is no real competition for Time Warner Cable in my area.

An Apple TV set top box on Time Warner might not fix every complaint, but at least I wouldn’t have to spend 5 minutes trying to pull up the list of on demand or recorded shows.