The image was first shared on My Nokia Blog, and it shows four Nokia smartphones with Greek names that we haven’t seen before. Those names include Nokia Phi, Nokia Pure Phi, Nokia Alpha, and Nokia PureLambda. The last device, the Nokia PureLambda appears to run Windows Phone OS 8.0.9842, also known as Apollo. 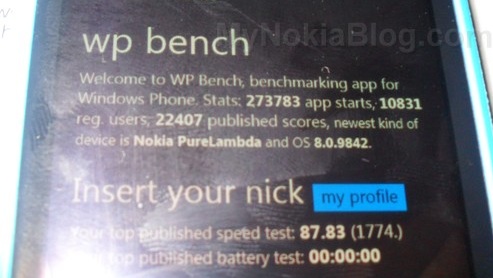 No matter how far along the PureView Windows Phone is, Nokia needs to wait for Microsoft to announce Windows Phone 8 before the phone can come to market. The current Windows Phone 7.5 can’t support PureView.

Unfortunately the images don’t have any more detail about the other Windows Phones listed. Based on the names, we assume they are more Windows Phone 8 smartphones, as they follow the Greek naming convention. Maybe one of them will feature the designs we saw a in a leaked ad few weeks ago. For now all we have is a few names and the hope that we’ll hear more about the devices and Windows Phone 8 later this year.