Google Chrome is getting lots of attention and impressions are all over the map. That is to be expected since this is only a Beta. (Keep reminding yourself of that folks.) If you look at the comments on this GBM post you’ll see that some are having good experiences and others less so.

Here are some of mine. 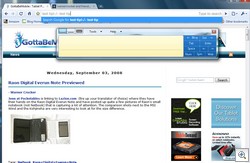 UPDATE: GBM Forum User loyukfai has started a thread in the GBM Forums for those who want to report their findings.