Just a week after we heard that Nintendo was slashing prices and sales forecasts on its 3DS, now it looks like they are trying to make up for lost revenue with the addition of in-game purchases in the 3DS (according to Joystiq). This is a desperate move to appease investors, but it will likely only lead to more desperate circumstances.

In a call with investors, Nintendo CEO Satoru Iwata announced that the in-game purchases will be arriving for the 3DS (as well as the Wii) by the end of this year. Developers will have the option to add the new feature to their games.

With Apple’s devices gradually devouring the portable gaming market, Nintendo needs to be touting its advantages over iOS. Instead, it’s taking on one of its rival’s less-appealing qualities. 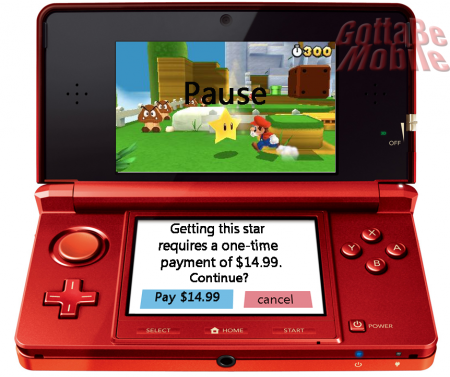 In-app purchases aren’t the favorite feature of most iOS users. If safeguards aren’t taken, children can end up racking up unwanted charges for their parents. It can be a hassle for adult gamers as well. How much fun is it to buy a game for $1, only to realize you missed the fine print that the full game could only be unlocked with five other $1 in-app purchases?

In-app sales can be good for making money, but an annoyance for customers. Apple has had a lot of success with them, but there’s a big difference between that and what Nintendo is doing. Apple didn’t introduce in-app purchases until their platform was in a dominant position. When you own the market, you can throw in something that’s somewhat annoying – but not deal-breaking – without too many problems.

The problem is that Nintendo is getting their asses kicked. And now here they come with in-game purchases.

You don’t introduce a sales mechanic that customers could find annoying when you’re dealing with atrocious sales. Get your system’s appeal off the ground first. Make sure you have a solid platform that’s guaranteed a huge share of the market for years to come. Then think about adding extra sales tricks.

There’s another big difference between Nintendo’s struggling 3DS platform and Apple’s booming iOS that makes this an unwise decision. iOS developers can get away with selling extra levels and content in-game because games usually only cost a few bucks in the first place.

3DS games typically cost around $40 each. If gamers (or young gamers’ parents) spend $40 on a portable game, they want any and all content included for that price. Spending anything over $40 for one single 3DS game makes the decision for parents that much easier: drive to the Apple Store and pick up a shiny new iPod touch for little Jimmy.

Flaunt What You’ve Got

Portable platforms like Nintendo’s and Sony’s do still have advantages over iOS. The classic platforms are still more likely to give you a game with a full console-like experience than iOS is. That is rapidly changing, but – for now – it’s one of the few things Nintendo’s portable platform still has going for it.

That is what Nintendo needs to be emphasizing. Instead of letting their game library get saturated with lame cutesy cash-ins that cost 10x what iOS’ cutesy cash-ins cost, they need to get quality first party games out there. They need a relentless onslaught of Mario, Zelda, Metroid, Punchout, etc. Now is the time for them to dig up any legendary franchises that they can get another quality game out of.

They already have one of those, with the remake of The Legend of Zelda: Ocarina of Time, but it was too late to the party (it launched in June, three months after the 3DS’ weak launch). They have a huge Mario title (Super Mario 3D Land) coming for the holidays, but by then the next iPhone, iPod touch, and iPad could very well be on the market – with upgraded gaming capabilities in tow.

When your platform – which was once king of the hill – is being threatened by the new kid on the block, the last thing you want to do is to make impulsive moves out of fear and desperation. They may look like quick short-term fixes, but they often end up doing more harm than good in the long run.