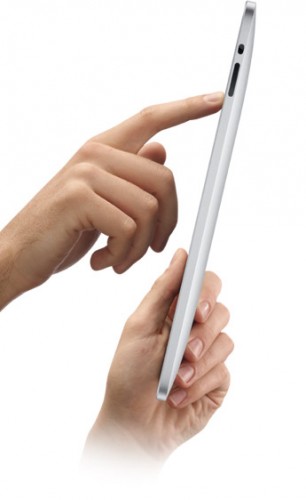 There are many, many, many things still to learn about Apple’s iPad. So much so that I’m amazed, but not really, at how much this is becoming a love it or hate it device based on what little we know at the moment. To be honest, this Tableteer, is combing through reports to discover what I can in my little personal journey to find out as much as I can about the new Tablet, and I look forward to continuing to comb in the months ahead.

But in all that I’m reading, there’s a theme that has emerged that as an observer of Tablets from the early days of Microsoft’s Tablets, that makes complete and total sense to me. There are two kinds of commentary floating around at the moment. Those who, like us here at GBM, are observing from afar and didn’t attend the event, and those from folks who were there and got to go hands on with the iPad, briefly.

Long time Tableteers will know where I’m going with this. Tablets are very personal devices and being able to explore these devices in your hand is a key to acceptance. It is a tactile experience. The pages of Tablet PC Buzz are filled with posts saying that Microsoft and its partners need to get Tablets in retail stores so customers can see for themselves. The same thing was true for UMPCs, but that would have only killed of the UMPC form factor more quickly. Many, including me, think it was a huge hesitant mistake on Microsoft and its partners part that helped compound Tablet PC woes. Until you can actually experience what it feels like to hold and manipulate those devices it’s all a head game.

Granted the iPad isn’t an Inking device, but the first time I picked up a Toshiba Portege 3505 and Inked on it, in a Circuit City store no less, I was sold. I’ve been sold ever since. I’ve been fortunate as a Tablet blogger to be able to hold more Tablets in my hands than most, and I have to say, the initial experience of a device in my hands rarely changes how I feel about a device once I’ve worked with it for awhile. It’s not love at first sight. It’s love at first touch.

Lots of talk has been made that Apple has a pre-conditioned market of iPhone and iPod Touch users who understand how to use this device, and Apple has an infrastructure brimming with more apps than can possibly be used ready to roll. Apple created the early adoption market and can now take advantage of that fact in ways that it couldn’t earlier. Quite a bit has also been made about the advances in technology that make these devices affordable to produce today, as opposed to a few years ago. The point is this, regardless of all of that, the real key to iPad adoption and sales will be Apple’s retail store infrastructure. Customers will be able to pick it up, play with it, and touch it themselves. No guessing. No need to read reviews trying to figure out if your view aligns with what’s being written. I haven’t held the device and don’t expect to for some time. But I’m guessing that many will do that beginning in a few months and decide to purchase based on that experience alone. Doubts will melt away, as did mine with that first Portege 3505, once consumers have that opportunity and the Apple Stores make that possible. I’m not exaggerating when I say that some will describe the experience as analogous to a sexual experience.

I think Apple knows this deep down. Think for a second about one of the targets everyone says Apple is aiming for, the Amazon Kindle. You can’t touch it before you buy it. By and large, when I hear people’s first reactions to that device after they finally make the plunge, there always seems to be a sense of relief in their musings that suggests they were nervous about the purchase until they finally got the device in their hands. When folks get to play with a Kindle that a friend has, I’ve seen far too many change their hesitant opinions to one that leads to an eventual purchase. Hands on is important. The current also ran on that front, the Nook, actually has a leg up on the Kindle there if they don’t fumble it.

I’m guessing after the initial rush of purchases by fan boys and early adopters, we’ll see a long adoption curve for the iPad. But the length of that curve will be much shorter due to the fact that Apple can put the iPad in potential buyers hands and let it sell itself.