Flexible batteries are sure to be a key part of the rumored iWatch, future smartwatch designs and other wearable tech that could include a jacket with a built-in battery capable of recharging your iPhone and iPad multiple times over.

The batteries in smartphones and current smartwatch designs like the Pebble are solid, heavy and restrict the design and size of wearable technology, but Apple and other companies are hard at work to deliver flexible batteries that could open endless possibilities for wearable technology.

In the video below Sascha Pallenberg of MobileGeeks showcases a collection of flexible battery technology that could come to your gadget in the near future.

In the video we see a collection of impressive battery technology demos. The new MacBook Air delivers 12+ hours of battery life, but with a flexible battery shown in the video Apple could expand the battery under the trackpad and keyboard for added capacity.

We also get a look at a Samsung Galaxy S3 flip cover that is modified to include several layers of flexible batteries which allows the case to deliver a boost in power of 60-70% without significantly adding weight or bulk. 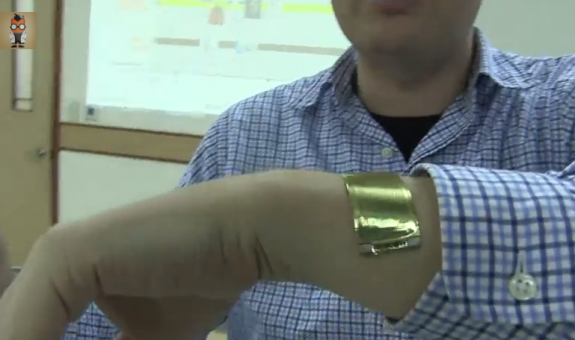 This flexible battery tech could be the key to an iWatch or smartwatch.

Things get really interesting when Pallenberg shows off a flexible battery designed for a smart watch wristband. This battery can mold around a wrist, giving a company like Apple more design freedom to deliver an iWatch that isn’t bulky or constricted to the traditional watch look and design. 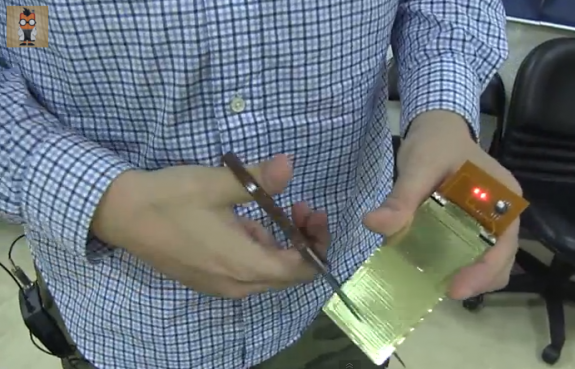 This flexible battery keeps working after being cut and stabbed.

Another amazing feature of this flexible battery technology is a safety feature. Watch the video as a battery in use is cut into pieces and stabbed with a pair of scissors. The battery keeps working through all of this. Needless to say, pulling the battery out of an iPhone and stabbing or cutting it would result in a lot of damage.

Another amazing idea is to build a few sheets of this flexible battery tech into clothing to deliver  charging capabilities without burdening the wearer with a bulky, heavy battery that could pose a threat if punctured.

This sounds like a perfect match for ScotteVest gear which already offers clothing that holds a backpack-worth of gadgets. The company showed off a TEC Jacket 2.0 concept at CES 2013 that combined battery cells into a jacket for on the go charging. This technology looks like it would be right at place in this and other wearable technology concepts.