This new iPhone 6 video is from a iPhone modifier in Moscow that reportedly sources parts from the same suppliers as Apple, giving it a head start on iPhone 6 parts and a very detailed look at the possible iPhone 6 design, which lines up with previous part leaks, rumors and iPhone 6 mock ups. 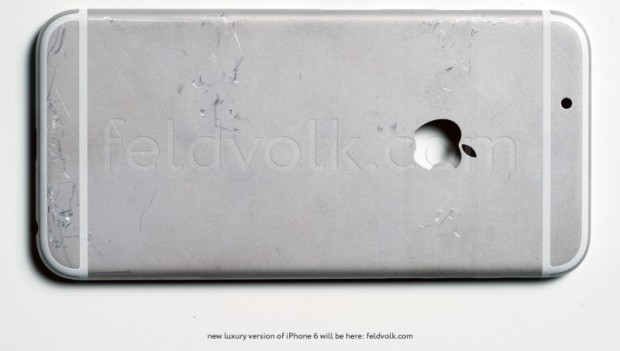 A new detailed iPhone 6 leak shows a potential back.

The latest iPhone 6 video leak shows a very detailed look at what could be the back of the iPhone 6 with a 4.7-inch display. Although the latest iPhone 6 rumors still point to 4.7-inch and 5.5-inch iPhone 6 screen sizes most leaks continue to showcase the smaller of the two. This alleged iPhone 6 part is in gold, but if you scroll down you’ll see a version in black.

The minute-and-a-half iPhone 6 video shows an unfinished part that may belong to the new iPhone Apple is planning for a September release. The part is unfinished with an open Apple logo but no speaker grills or camera opening. Feld and Volk shared the alleged iPhone 6 video and a collection of photos with MacRumors.

In addition to sourcing iPhone parts form the same suppliers, custom iPhones sold by Feld & Volk include Sapphire glass in the design. The company claims it sources Sapphire from the same supplier Apple will use this fall. iPhone 6 rumors focus on a Sapphire display providing a more durable design. An earlier iPhone 6 video leak shows a Sapphire display taking abuse from keys and a knife without scratching.

Although some holes still need drilled to make this a complete iPhone 6 back, the inside is set up similar to what we would expect form a legitimate part. Some rough edged include visible screw openings which are out of character for an Apple product, but the company claims could be covered in later parts of the process. 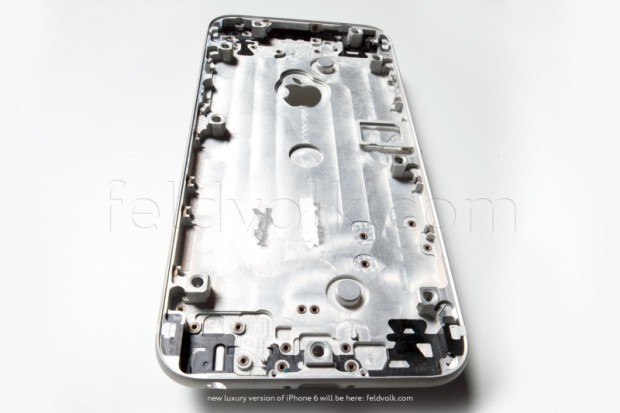 There is still an open Apple logo on the back of this alleged iPhone 6 part. Speculation includes using the screen backlight to light this up, but Apple also holds patents to use this for passing radio communication through a logo, which is a more reasonable assumption. The source believes it could play a role in NFC, which some rumors suggest Apple will adopt to make mobile payments work, but it is still early to put much stock in NFC on the iPhone 6.

The photos also show the curved edge that our iPhone 6 mock-up includes, slim volume buttons, a new mute switch opening and a hole for a power button on the right side of the device. Tall smartphones with power buttons on a side are easier to use with one hand than a top mounted power button. 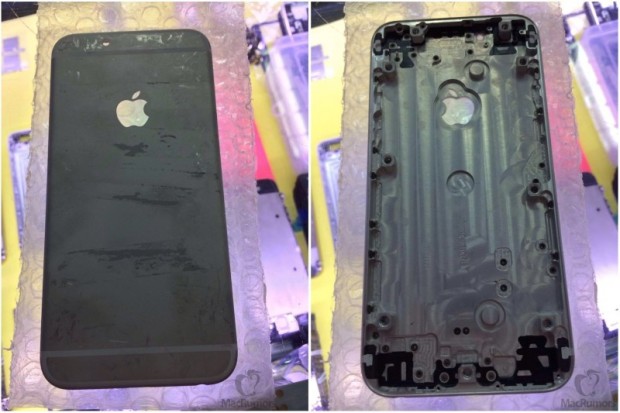 A black iPhone 6 that many shoppers may want this fall.

On top of all those part leaks we also see a black iPhone 6 back. This may simply be a start of a custom iPhone 6 that the company will work on, or a sign that Apple is not content with the current Space gray option. A deep black iPhone 6 does look very nice and if the antenna breaks do stay in some capacity this dark back hides them well.

iPhone 6 rumors include a completely new design, similar to what this leak shows in detail. Inside expect a better camera, but not necessarily a major megapixel jump, a new Apple A8 processor and 1GB of RAM. The iPhone 6 release date is all but confirmed for September 2014 with multiple leaks pointing to late in the month.