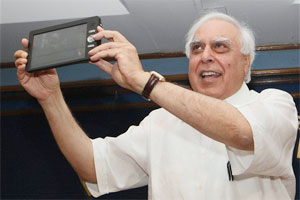 The Indian Human Resource Development Minister plans on rolling out small tablet devices to students starting in 2011. The devices will have either 5″, 7″ or 9″ touchscreen displays and will come with a PDF reader, web browser, a video conferencing application, media player and OpenOffice. Those features sound like pretty standard fare these days, until you realize that the Indian government plans on making them available for $35 at launch and as low as $10 after government subsidies.

At first glance this looks like an excellent idea, but it may be unrealistic to widely distribute such a device for $35. Of course, $35 does go a lot further in India than here in the U.S., but I doubt the Indian government will be able to get such a device produced for that price. The OLPC, which has noble intentions, tried to produce sub $100 computers for children in developing nations, but the best they could do so far is about $200. The Indian government introduced a $10 laptop a while back that never saw the light of day.