With the announcement of the iPhone 5S a whole new league of games is coming. One of these games is a refresh to the popular game Infinity Blade.

Infinity Blade 3 is the final game which will end the Infinity Blade series. By the looks of the game, it will fully take advantage of the new hardware inside of the iPhone 5S. 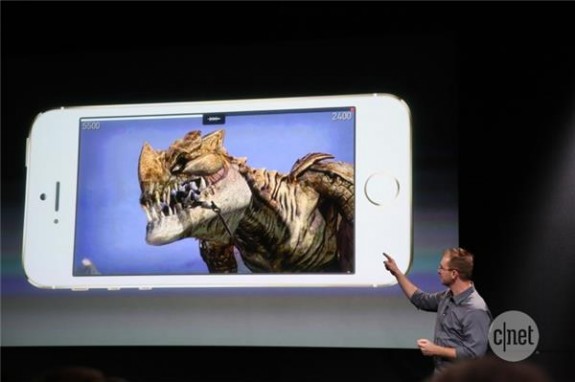 Some of the hardware improvements to help boost the gaming experience for consumers are Open GL/ES 3.0 for graphics and a newly designed 64 bit A7 processor. By combining these two things the quality of the graphics will be hard to surpass.

The processor is up to 40 times more powerful and graphics performance is 56 times greater than previous iPhones. Given that developers modify their games to use available resources, the new iPhone 5S will be a serious contender in mobile gaming. One of the developers for Infinity Blade 3 said that it took him only two hours to port the game over to a 64 bit version, which is quite impressive.

In terms of the game itself, the world that you plan in is much larger than the previous versions. Another big change to the game is that you have two characters to choose from, compared to a single character in Infinity Blade 1 and 2. During the demo, audience at Cupertino was shown a preview of this new character, whose name is “Cyrus.” The difference between the two characters is that one has more skills for stealth, while the other is a thief. Also, when the game first loads up, the gamer has the choice of which island to start on, which is a cool feature.

Gameplay seems extremely interactive, and still familiar enough to those whom have played the older games. From a totally new designed world, to the monsters themselves, the graphics shown in pictures from the demo are amazing. One scene in particular that showed off the game really well was when the character fought a dragon. The textures from the skin on the dragon to the sky and other scenery were truly amazing. The game also has blur affects, which should make fire and other potion attacks more graphically pleasing.

The graphics are said to be almost on par with the Xbox 360 and PS3, which is incredible for a phone.

There was no talk of when the game will be available, but it is expected to be sometime around the iPhone 5S launch date.