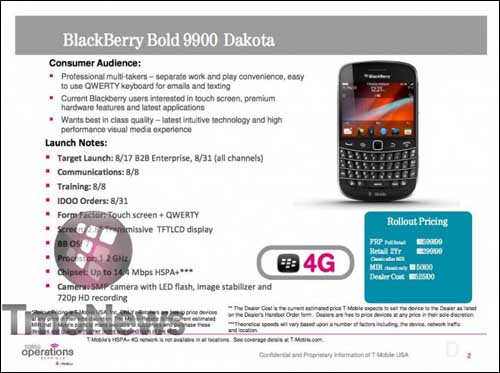 In addition to the leaked August 31st release date that we had reported on earlier, it seems that pricing information is now leaked for the BlackBerry Bold 9900 when it launches for T-Mobile USA at the end of the month. The handset will be priced at $299 with a two-year contract after a $50 mail-in-rebate, making the up-front contract price a whopping $350. The HSPA+ handset will be able to tap into T-Mobile’s high speed 4G network with a theoretical download speed of 14.4 Mbps, though real world results will be lower. The world’s first ‘4G’ BlackBerry will be available for $600 sans contract. Not only will the Bold 9900 be the world’s most powerful BlackBerry, it will also be a pretty fast one too thanks to being the world’s first 4G BlackBerry device.

The handset will be the first handset in the traditional BlackBerry candybar form factor to combine both a touchscreen and a front-facing QWERTY keyboard. RIM had released the BlackBerry Torch 9800 earlier this year on AT&T that approached the touchscreen-hardware keyboard design utilizing a slider form factor. For enterprise users and BlackBerry purists, this may be the best and most powerful BlackBerry to date.