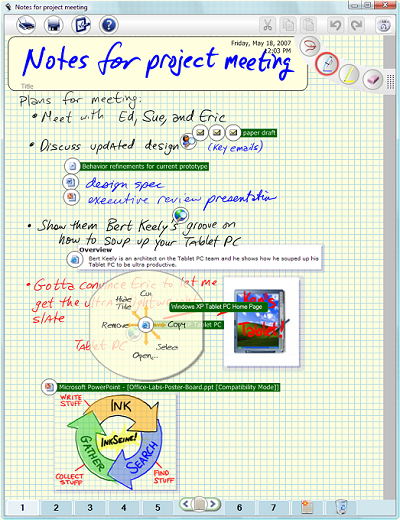 As the announcement of the mythical Apple Tablet creeps closer, and as I’m cranking up an HP 2730p Tablet PC to go back into Ink note taking mode for the final week of rehearsals for The Buddy Holly Story at Wayside Theatre, I know there are quite a few Inkers out there who are a bit leery about what is going to happen tomorrow.

Already we’ve seen comments from folks about the lack of Inking, about the fact that a Tablet isn’t a Tablet unless you’re able to Ink on it, and of course the fact that the word slate has been rejuvenated as a part of a possible name for the new device. In my cynical commentary I’ve said more than once that I’ll be laughing my tookus off at all those who have dismissed Digital Ink as a valid data input method, who all of a sudden turn on a dime and discover that OMIGOD! you can actually write on a computer if Apple pulls out some form of Digital Inking

The speculation and guessing has been fun and a big part of that has been the continual dismissal of Digital Inking with a stylus. We Tableteers cringe when we hear about how this just doesn’t work as an input form and the blame is laid on the hardware and the software.

Yesterday when I was visiting my mother, who was a second grade teacher for most of her life, we were talking about this and she reminded me that when I was learning to write I had great printing skills, but was lousy at cursive. I still am. That reminded me of my first Tablet PC experiences when I printed more than I scribbled in cursive. That was purely a psychological barrier. I finally got over that barrier and even with my atrocious handwriting, discovered that whether leaving the digital notes I took as Ink, or having them recognized into text, the Tablet PC did indeed work better if I wrote in cursive.

Kindling my memory and piquing my interest further, my mother, in the way mother’s always dispense wisdom said, “I think these people who don’t think writing on a Tablet works are wrongly blaming the computer and not themselves. Most of us hate our handwriting. ” Her point was simple. Penmanship is personal expression and has become a lost art because many are uncomfortable with how they write. Many folks just aren’t comfortable presenting anything (even to themselves) written in their own scrawl. It goes against their self perception, something that text composed on a keyboard can help mask or bolster. I mean face it, text on a page is text on a page and could be typed by a monkey with enough luck, so there’s no ego or self perception issues at stake by using a keyboard. (Unless you forget to use Spell Check.)

Microsoft solved some of that (and then hopelessly and stupidly neglected to tell the world about it) by making the searching of Digital Ink almost as accurate as the searching of text. This made it comfortable for many Tableteers to take notes in Ink and leave it that way. OneNote excelled at this and still does. Handwriting recognition, while still important, became less so for those of us who checked our egos at the digitizer.

There’s a small part of me that hopes Apple unveils some form of Digital Inking tomorrow but I don’t really believe it will. Apple wants an experience we can all grasp quickly and see it enhancing our self perceptions not weakening them. That said, rumors that Apple has let leak that adjusting to the UI on the mythical Apple Tablet will take some getting used to remind me of that line often spoken about the early Tablet PCs: “The Tablet doesn’t learn you, you learn the Tablet.” That line was derided by most pundits back then and still is today. That said,  I’m betting that some form of that line will be spoken about the Apple Tablet and its supposed revolutionary UI, tomorrow. When it does, and becomes adopted as propaganda by the masses, once again I’ll be looking to lose weight in the area of my derriere by laughing uproariously.