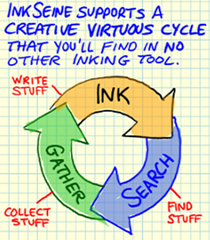 We’ve been talking up InkSeine for quite awhile, and it looks like we might have something to get really excited about come the first of next year.

Ken Hinckley, one of the primary Microsoft Research developers behind InkSeine, let us know that Microsoft plans on releasing the research demo in the first quarter of 2008. It will not be a product; rather, it is being released as a “functional research demo to push what is possible with Tablet PC”. Be sure to what these two videos ( first and second ) and visit the InkSeine project page and browse the tutorial to learn more.

Here is what Ken had to say regarding the potential release of InkSeine:

We’re working hard on InkSeine to clean up some of the bugs and usability issues we’ve identified from our internal beta testing, and to plug in some of the key features that are missing. (People want to be able to delete an old unused page from their notes? The nerve of them!)

But we still plan to make the demo available externally as a prototype for people to play with. On the home front I’m Dad to 9 month old identical twin girls now, so I can’t always make as much progress on the future as I’d like to while I’m changing diapers :-) But we’re looking at making it available probably sometime in the 1st quarter of next year (and just to emphasize – it’s not a product – but a very functional research demo that tries to push on what is possible with Tablet PC).

The demo really works best on Vista because the improved handwriting recognizer there indexes your email and adds all the out-of-vocabulary words to its word list (names, technical terms, acronyms, whatever) so make sure you’ve got yerself a Vista tablet ready to go for ’08 :-)