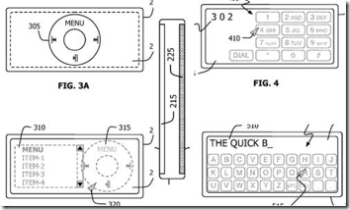 As Apple preps to launch the much anticipated multi-touch enabled iPhone, this patent indicates Apple is clearly looking beyond the iPhone and into tablet computers, other phones, and video and audio players as it relates to touch.

According to the patent, touch is enabled through a cursor that is controlled from the back of the device when the finger makes contact with the back. What is also interesting is this statement from the patent: “may be operated with a single hand, wherein cursor movement and control element selection may be accomplished without lifting one’s finger”.

To  be honest, I’ve never considered touch on the back of a tablet pc, and don’t know the use case that would justify it on a tablet. However, I could definitely see something like this coming in to play on small devices like UMPCs and MIDs, where the fingers are held on the back, and they are used for typing, etc. How else could you see something like this being used?

Here is the abstract of the patent:

An electronic device uses separate surfaces for input and output. One of the surfaces (e.g., the bottom) includes a force-sensitive touch-surface through which a user provides input (e.g., cursor manipulation and control element selection). On a second surface (e.g., the top), a display element is used to present information appropriate to the device’s function (e.g., video information), one or more control elements and a cursor. The cursor is controlled through manipulation of the back-side touch-surface. The cursor identifies where on the back-side touch-surface the user’s finger has made contact. When the cursor is positioned over the desired control element, the user selects or activates the function associated with the control element by applying pressure to the force-sensitive touch-surface with their finger. Accordingly, the electronic device may be operated with a single hand, wherein cursor movement and control element selection may be accomplished without lifting one’s finger.