Android Users don’t have to wait to test the Samsung Galaxy S4’s new handwriting technology –they can experience it right now by downloading the MyScripts Handwriting Calculator application from the Google Play Store. 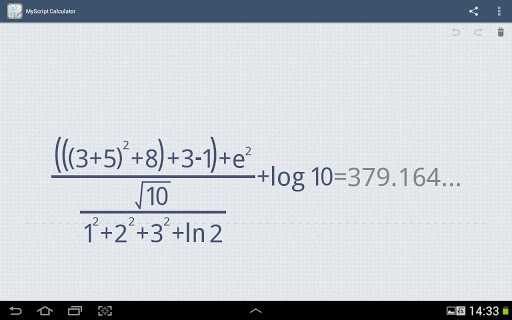 As for the calculator app in which you can currently test this technology in, it’s available for free and includes every feature one would think a calculator with handwriting recognition would. This laundry list includes some truly impressive things like the ability to have the app convert handwritten symbols and text to their digital counterparts, and the ability to create formulas and expressions without ever having to launch Android’s native keyboard and hunt around for symbols users don’t regularly use. The software can also autocorrect any text input, saving users the trouble of having to erase entire words and rewrite them simply because you missed a letter at the end of a word already in the application’s default dictionary.

Currently, MyScript supports the Cyrillic, Arabic, and English and can also decipher lines, circles, parallelograms, and other shapes.

Though the MyScript’s handwriting calculator is only available on Android devices, the underlying technology is available on other platforms. Versions of its handwriting recognition software are available for Windows, iOS, Mac OS, Linux, and Symbian – there’s currently no version on Windows Phone, but those still carrying a Windows Mobile device can still get in on the action.

App developers can license the technology for inclusion in their own applications as well using the company’s software development kit.

The Samsung Galaxy S4 was introduced Thursday evening at Radio City Music Hall in New York. The Galaxy S4 features a larger display than its predecessor, yet it is thinner and lighter. Samsung’s new Android phone will launch at the end of April in some markets, though U.S. carriers have yet to announce release dates. AT&T, Sprint, T-Mobile, U.S Cellular and Verizon have all announced that they will carry the Samsung Galaxy S4.