Inside a NFL Photographer's Gear Bag

Capturing beautiful photos of the NFL Playoff games takes a lot of talent, a good amount of mobile tech that needs to work the first time every time since a NFL photographer can’t ask Colin Kaepernick to lob a game winning throw a second time.

We had a chance to talk to a NFL photographer who shot two games last week to see what kind of gear he carries to shoot a NFL game, specifically the Playoffs as the final eight teams prepare to fight for the Super Bowl 2014 showdown.

Andrew Weber is a professional photographer with experience covering college and professional sports for USA Today and other publications, and you may have seen his work appear on the cover of Sports Illustrated and other magazines and websites during 2013 and last weekend’s playoff games. 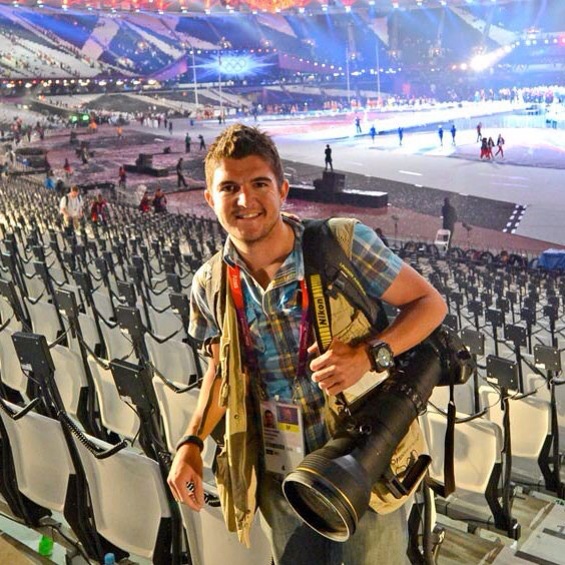 Weber carries three cameras on the sidelines and doesn’t bring a phone, but mobile tech changes the speed he needs to work at in order for his editors to deliver photos to smartphone users and fantasy football players as fast as possible.

Read: How to Watch NFL Playoffs on iPhone & Android

What kind of camera gear do you carry for a NFL game? (One camera or multiples, lenses, accessories)

I usually carry three cameras with me.

What mobile tech do you carry with you to the sidelines?

I have a USB Verizon 4G that is plugged into my laptop if I am transmitting from the sidelines. It usually depends on the stadium where I am able to get a signal or not. I wish Verizon would figure out a way to be able to use mobile devices with 80,000 people in a stadium. The first cell phone carrier to do that will win in my opinion.

How do you prep your gear to handle the cold we saw during early playoff games?

All pro bodies and lenses are built to handle extreme conditions. The only thing I pay attention to is my camera batteries as they wear down a little quicker in the cold. 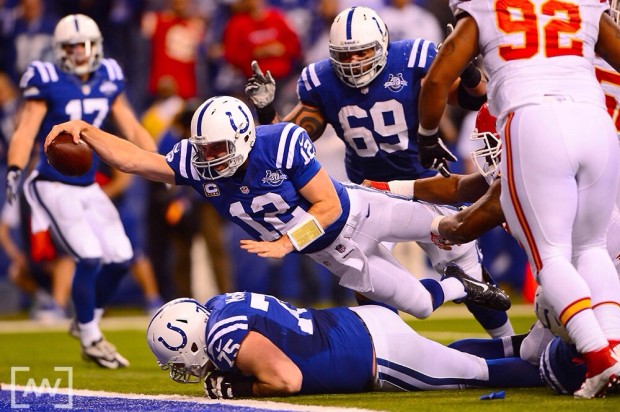 One example of the work Weber is able to do with his mobile gear and talent.

What carrier and phone do you use to get connected?

I have Verizon with a iPhone 5. I don’t ever carry my cell phone with me on the sidelines as it’s the biggest distraction when your trying to work.

What happens after you take a photo that you want to get to an editor? (As card to computer to editing app to upload? Does it happen during the game or is it all post game)

With mobile and people being addicted to fantasy football, I have to get my images to editors as quickly as possible. With 90% of all professional cameras are still using compact flash cards, so after a touchdown or a big play I take the memory card out of my camera, put it into my Lexar card read and download the photos that I need to transmit. Most people download the whole card every time, but it slows down the process as I need to get back to shooting. I crop and edit the photo in Photoshop and I caption the photo with a program called Photo Mechanic then FTP it with Fetch.

Do you ever take photos with your phone at games? If not what’s the biggest limiting factor?

I don’t ever take photos with my iPhone, just because of the file quality compared to carry around a $5,000 camera. Also usually when I arrive at the stadium I put my cell phone in my book bag and don’t get it out until after the game is over. 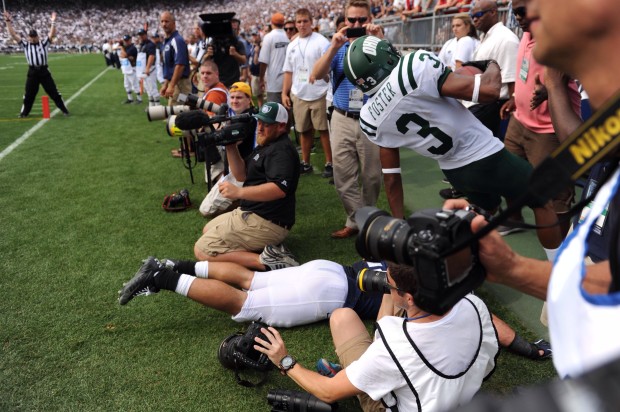 Weber has not lost a camera due to a collision, but there are close calls.

Ever lost a camera to a collision with a player?

I have never lost a camera due to a collision but I have been pretty close a few times.

Does tech limit you in any way?

The biggest factor is cell service, I use my Verizon 4G card 90% of the time to transmit pictures, but I am unable at times due to the amount of people in the stadium. Sometimes I have full bars and I am still unable to get a connection.

You can follow Andrew Weber as he photographs NFL and other major events on twitter and on his blog where he will post updates and photos of the experience.