Inside an Olympic Photographer's Gear Bag

The 2012 Summer Olympics are set to kick off in London and we caught up with an Olympic photographer about to leave for London to figure out what’s in his gear bag to cover the Summer Olympic games in the ever-changing weather of London.

Andrew Weber, is a photographer with the US Presswire who will be photographing the Olympic games. We caught up with Weber just days before he took off for several weeks of fast paced photography to find out what his essential mobile gear is.

As you would expect, there is a lot of photography gear, all of which is part of his carry on. In the bag below you’ll see three Nikon cameras and 8 lenses, listed below. 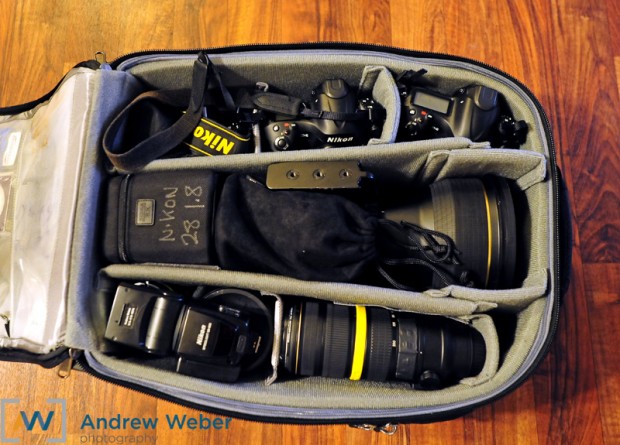 Cameras and Lenses for covering the 2012 Summer Olympic games.

Weber carries two Nikon D4 bodies and a Nikon D3 as well as the following lenses, one of which ends up in his backpack with the rest of his gadgets.

As far as gadgets go, Weber is packing an assortment of Apple gear and an awesome portable power pack which he will use to keep his MacBook Air running while in the air. 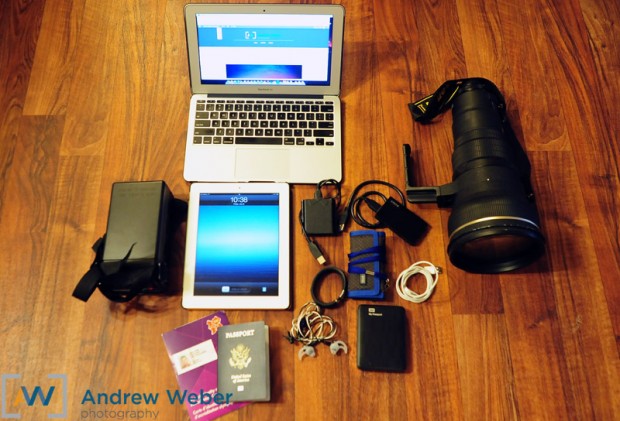 Inside the gear bag of a photographer at the London 2012 Summer Olympic Games.

In the photo above is;

The Vagabond Mini is an interesting gadget that is designed to provide portable power to flash units, but works as a portable power source for anything, Weber says, “everyone who travels should have one.”

All of this gear, including that massive camera lens, fit in a waterproof Under Armor bookbag.

According to Weber, “Everything is done pretty instantly. I will try to get the photos posted online as soon as possible. I take the memory card out of my camera look at the pictures on my computer and edit them and ftp them to our photo editors.”

When it comes to mobile technology Weber is relying on wireless and ethernet at most events to upload photos, but will also be packing a wireless connection for covering some events. He’ll also have a Samsung Galaxy Note along on the trip thanks to the Samsung Olympic sponsorship.

You can follow Andrew Weber as he photographs the 2012 Olympic games on twitter and on his blog where he will post updates and photos of the experience.