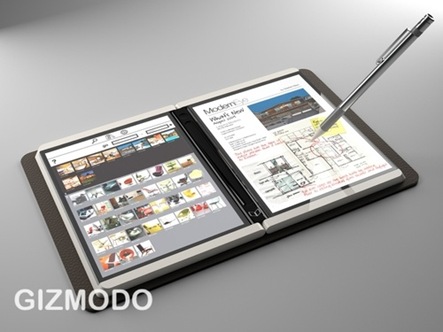 An article on Gizmodo describes the current approaches to tablet design as wrong-headed and breaks them into two camps, making phones bigger and making PCs smaller. It’s actually a good read and receiving many positive comments. Unfortunately the two approaches being described don’t line up very well with what’s actually happening, and the whole thing winds up being a longing look at Microsoft’s concept project, Courier, without demonstrating a great understanding of what Courier is.

First off, I would love to see Courier become a reality. I really would. However, the video demos that Gizmodo unearthed only showed an application. Let’s call it, I don’t know, “Inkseine”. Yes, this “Inkseine” is awesome and, in this fictitious scenario, I know at least a couple of people have said they want it as the Tablet PC interface. But it’s still one application, albeit a versatile one. If that’s all it does, then Courier would be an appliance, not a computer. I could live with that, but the article’s author Jason Chen argues against such an approach in his take on the “making phones bigger,” pointing out the value of multi-tasking, interoperability, and peripherals.

“Making phones bigger” focuses on the iPad and how it’s a basically just a big iPhone. Okay, let’s forget for a moment that the iPad introduces new UI elements and layouts to take advantage of the larger size, it should be noted the iPhone OS itself is a stripped down version of Mac OS X, a desktop OS. The strip-down approach was criticized by Jon Rubinstein of Palm because kept the iPhone OS from being “lean” enough to run efficiently on a mobile processor (though that criticism seems irrelevant now thanks to chipsets like Apple’s A4 and Texas Instruments’ OMAP4).

My take was that building the iPhone OS from OS X allowed Apple to easily scale it back up as technology advances, which we’re seeing now. Apple isn’t just making the iPhone OS bigger for the iPad; they’re moving it closer to its roots in Mac OS X. That’s obvious with the iWork apps. Its music app is basically “iTunes lite”. Yes, I agree you can’t just make a big phone and call it a tablet, but I believe Apple approached the iPhone OS with upscaling in mind.

It’s also important to note that the iPhone was a fresh take on the phone interface, introducing multi-touch and accelerometer input. In many ways, it has always been a small slate tablet that can make phone calls. Scaling it up to a larger slate that can’t make phone calls isn’t a great stretch.

Now, the Android-based tablets are a different story. Android is based on the Linux kernel but not simply a flavor of Linux. It was built from the ground up as a phone OS. However, Android is also an open source OS still in its early stages of development. It can be taken in different directions, including tablets. The enTourage eDGe, a dual-screen eReader/tablet with pen input, is the closest analogue we have to Courier, and it runs a custom version of Android. Building up to Courier from a phone OS is not an impossibility.

So what about making PCs smaller? We’ve already seen that shrinking Mac OS X to phone size is possible. Shrinking Windows to tablet size should be easy by comparison. The problem is, we haven’t really seen that approach.

Windows on a Tablet PC is not a smaller version of Windows – it’s bigger. Tablet functionality has been an add-on since it was introduced in Windows XP. Overlay UIs to simplify the tablet experience add even more overhead. Tablet PCs, which should be smaller, more efficient devices, actually use more processing power than notebooks and desktops. I’ve been calling on Microsoft to strip down a version of Windows, focus the interface, and custom it for tablet input, but it hasn’t happened yet, and I’m not going say it’s the wrong approach until I see it in action.

And if Courier is the example of what tablets should be, well, let’s not forget that Codex, the alleged forerunner of Courier, runs Windows. Can’t really hold up Courier as the paragon without acknowledging the full version of Windows underneath.

Bottom line: I agree with Jason Chen’s logic and reasoning, but I think he argues abstract points. The iPhone OS was derived from Mac OS X, so it should not be categorized solely as a phone OS. The “shrinking PC” approach can’t be ruled out because it hasn’t happened. And the example of tablet perfection being held up is built (allegedly) upon a prototype that ran the full version of Windows (and was made of two OQOs). Maybe those two paths to make a tablet are wrong, but they are paths that no one is really following.