With the Intel Edison, a new bite-sized computer, even smaller devices could connect to the internet and usher in a new wave of seamless web-based products.

Announced at the Consumer Electronics Show, Intel Edison isn’t just some processor that’s about the size of an SD card. Instead, Intel Edison is a completely encapsulated dual-core processor and motherboard that includes support for both Wi-Fi and Bluetooth connections. 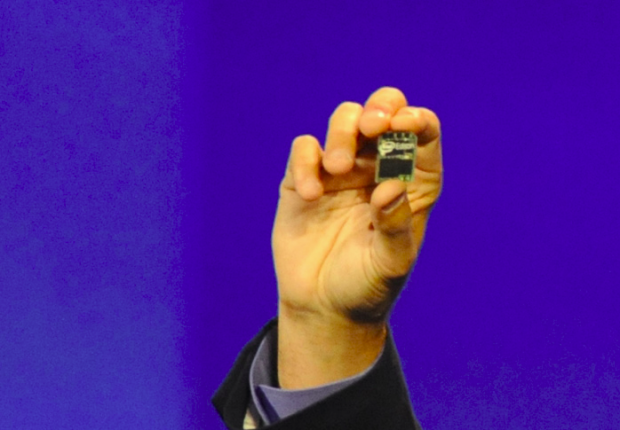 In theory, the processor could spawn an entire wave of new small products that wouldn’t necessarily be possible without Edison. For example, Intel’s presentation included an entire line of products meant for Nurseries of the future. One product in the demonstration was a Mimo onesie that can monitor and report on a child’s temperature and location. Intel then outfitted a coffee mug that was able to display all of that information.

Mimo itself uses the Intel Edison technology to surface up-to-date baby statistics online. There, its users can monitor their child’s location. Mimo also uses the technology to send notifications directly to parent’s smartphones. The company also showed off a way to automatically turns on a bottle warmer in another room once the child wakes up. Mimo can then send parents a notification about the bottle being warm enough for consumption.

Hardware is only as decent as the products it replaces, and Intel Edision isn’t an exception to the rule. As such, Intel is introducing an app store for users to download more software for the micro PC. With that platform and app store, almost anything and everything could be connected. For example, lamps, desks and special clothing could all be tracked and controlled using a computer or a smartphone.

Intel says users will be able to purchase Intel Edison hardware beginning sometime around June. It didn’t share how much the memory card-sized computer will cost. Mimo won’t arrive online until February for $199.99. It’s currently sold out of its initial allotment, however users can submit their email address and get a notification when the company has more.