Intel is developing new camera technologies that could sense emotion, allowing for a world where your smartphone could sense that you’re not having a good day and cheer you up. Still a far cry from a cure for depression, a mood-tracking phone could open the doors to your phone offering you some ways to remedy the blues.

Intel’s new algorithms would be able to track what you’re feeling by the emotional response given on your face. The feature could be delivered to laptops and Ultrabooks as soon as late next year, and eventually these sophisticated cameras could be embedded on smartphones and tablets.

Though widely known for its processors, Intel has been exploring how facial expressions could help shape the digital future with U.S. wireless carrier Sprint. The two companies had shown off a concept of a digital billboard and signage system that could identify the gender and age of a person looking at the billboard to deliver tailored advertising. This new emotion-sensing camera could further this by studying the viewer’s face to see if the ad is appealing to them, and if not, the sign or billboard could quickly switch over to another ad. 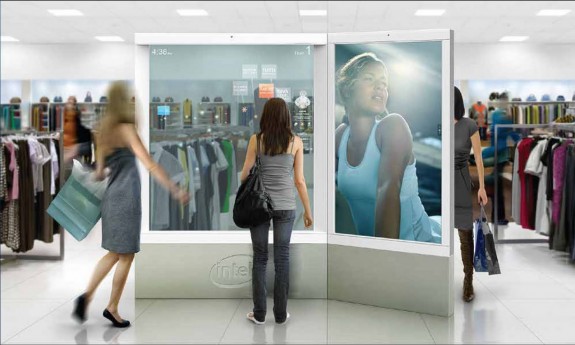 Coupled with Google’s predictive search engine on a smartphone, like Google Now, the feature could lead to a lot of possibilities. Perhaps your phone could sense you’re not having a good day by the looks on your face, and pulling in your past behavior with Google Now, it could suggest a cheer-me-up meal at a nice restaurant, book you a spa treatment with a massage to relax you if you’re feeling tense, or suggest a jog on a scenic trail to calm your nerves.

Intel’s emotion-sensing camera could help to change the way we interact with technology and with our phones. When coupled with voice controls and anticipatory search results like those offered by Google Now, it could make phones more intuitive.

Giga Om speculates another use for the technology in autonomous vehicles. Thanks to Here, we’ve already seen how Nokia may envision what a natural driving experience may be based on human driving behavior, and this could allow makers of autonomous cars to program these vehicles to drive more similarly to humans for a more natural ride. With technology that could recognize objects around a car, Intel could provide the car with even more intelligence. If it spots a deer, it could then anticipate what the deer’s behavior would be and use this knowledge to aid in its driving. This would be more enhanced than just sensing that there is an object ahead. If the car detects that the object in front of it is a small child, it could take a more cautious approach given the unpredictable nature of children.

Even a general web experience could be enhanced with the camera technology. Samsung and LG already have cameras on their phones that senses you’re not watching a video anymore and automatically pause that video. But what about ads. If you’re looking at ads or videos that you highly enjoy, Intel’s camera tech could allow YouTube and other content centers to deliver more similar content when it senses your face showing pleasure. Pandora could play more similar songs when your face displays happiness without you having to rate the song yourself.

All this was supposed to be part of Intel’s foray into the living room TV service space with its rumored OnCue service. That would allow Intel to find videos that customers enjoy watching and delivered personalize recommendations, like those on Netflix, without any active input or rating that a user has to give for a specific video. However the launch may have been postponed due to privacy concerns.