These new processors are part of the third-generation Intel Core i family of processors announced last year at CES, but mark a more efficient processor that can deliver a better user experience through thinner, lighter, longer lasting Ultrabooks and Ultrabook Convertibles. 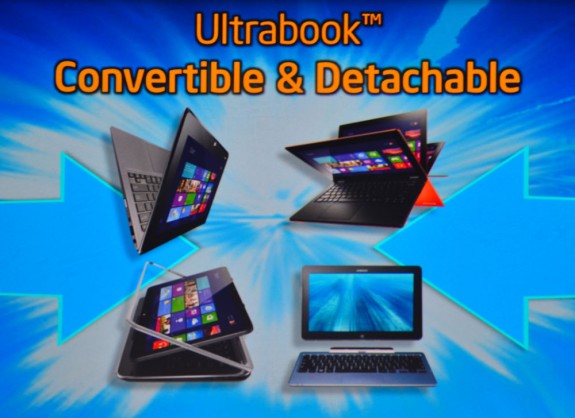 Intel boasts that the third generation Intel Core i ULV processors can run on as little as 7 watts, which is important because it enables manufacturers like Lenovo, HP, Dell, Acer and others to slim down Ultrabook Convertibles and Ultrabook Detachables as well as tablets. Intel claims 5X better than Tegra performance on the new processor, but didn’t differentiate between the Tegra 3 and new Tegra 4 processors.

We’ve already seen the first device coming with the Intel Core i 3rd generation Ultrabook Convertible, the Lenovo IdeaPad Yoga 11S. At the Intel press conference Intel demoed Civilization V  running on the Yoga 11S.Originally planned as part of the Intel 4th generation Core i processor family, this processor is coming to market early, and should be in the hands of consumers by the middle of the summer. We expect more announcements of Intel Core i third generation ULV processors at CES 2013 and into the next several months.

The biggest changes will come later this year as the Intel fourth generation Intel Core i processors arrive. Intel claims these new processors will deliver real all day battery life so users can leave their power chargers at home without worrying about running out of power mid-day.