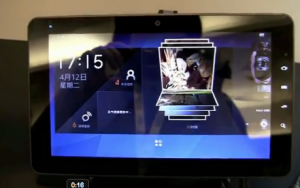 At the Intel Developer Forum, a reference hardware tablet running the MeeGo operating system, which was originally intended as a joint effort between Nokia and Intel until the former pulled out in favor of Windows Phone 7. In China, as part of the Intel Developer Forum, Intel and partner Tencents are looking to position MeeGo as an open alternative to Android. Despite the growing popularity of Android, the platform is generating mixed sentiments with users in China because of a battle between the Chinese government and Google, prompting Google to pull its apps and Android Market out of Android handsets in China.

The interesting thing is that Intel had revamped the MeeGo UI on tablets. Rather than creating columns for different sylos of information, the UI is organized in what appears to be a more organic way.

Here’s a video, taken from Netbook News of the new UI:

Here’s a look at the old UI: