Touch screens can be amazing things on Tablets and smartphones. They let us interact with our devices to control apps, play games, and more. When they work well it’s as if the device disappears and we’re working intimately with whatever we choose to have on the screen. When they don’t, well, they don’t. Ever wonder how the touch screen on your gets tested to make sure it can pinch, zoom, swipe, and use game controls? Then you should take a look at this MIT article and accompanying video. 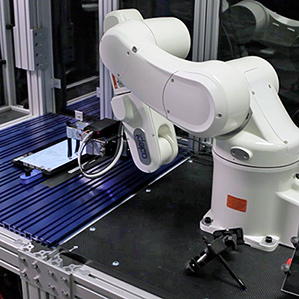 At Intel’s Silicon Valley lab engineers use a robot called Oculus to test touch screens. Equipped with two fingers it can touch a screen the way humans do so that engineers can measure responsiveness and how well a touch screen performs. The App example mentioned in the article is the popular Cut the Rope. The engineers can program the robot to play the game to win or to lose. The two fingers have “rubbery” pads on the tips to simulate the touch of a human finger and the Oculus Robot can help determine precise interactions with the screen.

The Oculus robot was created to move silicon wafers around at Intel, but is finding another use measuring touch screen accuracy to determine how well a particular screen will do in human hands and  for human expectations.

Intel’s tests on human subjects have also shown that perceptions of quality can vary significantly depending on how people are using a device. People unconsciously raise their standards when using a stylus, for example, says Raleigh. “People are used to pens and pencils, and so it has to be very fast, about one millisecond of delay,” he says. Meanwhile, children generally expect a quicker response from a touch screen than adults, whatever the context.

The testing is recorded using a Hollywood production camera manufactured by Red that captures video at 300 frames per second. Software then takes that footage and analyzes how the screen responds, converting that data into numbers that the engineers can then work with.

Sauce Labs is a company that offers phone and Web app testing, and its CEO, Jason Huggins, says there are similar robots inside companies like Apple, Samsung, LG, and others that we don’t hear about because of competition. Intel’s Oculus robot, unlike some industry robot testers doesn’t just measure against fixed technical specifications, but instead measures based on how people actually perceive touch screens.