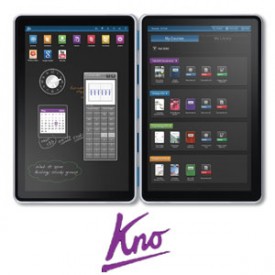 In the latest funding round where Kno sees a $30 million cash infusion from Intel Capital and Advance Publications, Intel will also get to license Kno’s hardware reference designs for its single- and dual-screen tablets targeted at the education market.

News of the Intel licensing comes after Know had indicated that it would abandon the hardware business and re-align its strategy to create just the textbook delivery software and annotations and note-taking features to piggy-back on existing tablets from other manufacturers. This will allow Kno to create software for iPad and Android tablets.

Though Intel may be licensing Kno’s reference designs, the chip-maker won’t be creating its own branded tablets. Rather, Intel, in a bid to fight ARM-powered tablets with its own Atom-based CPU for mobile devices, would look at sharing these designs with its own partners to create a line of educational tablets, perhaps using Atom processors. The move may also augment the Intel-branded Classmate PC lineup where Intel brands its own educational notebooks.