While wireless carrier Orange had announced the Santa Clara smartphone, which is powered by Intel’s x86 Atom architecture in the form of the Medfield chipset, at Mobile World Congress, we are now hearing more details about the efficiency and power of Medfield coupled with the Android platform. Intel reps at the trade show revealed to blog Unwired View that the Santa Clara smartphone will have great battery life, including 14 days of standby time, 6 hours of HD video playback, and 8 hours of talk time.

These early battery life results were delivered via Intel, and we’ll have to see what real world performance will deliver. Based on Intel’s numbers, we can expect to see about a full day usage on a single-charge for heavy users and about 2 days between recharge cycles for moderate smartphone users. 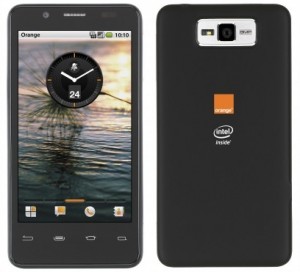 In the past, early benchmarking results reveal that Medfield will offer great performance. The single-core Atom-based processor is clocked at 1.6 GHz and delivers comparable results to dual-core chipsets running ARM architecture, like those made by Samsung, Texas Instruments, and Qualcomm. Given that Intel’s chips are often considered in the past to be more power hungry compared to ARM counterparts, the battery life results quoted offer promise to the mobile architecture platform where battery life is always a big concern, especially in an age where screens are getting bigger and 4G LTE offers great download speeds making it even more appealing for users to consume data on the go.

Intel’s not stopping there, however. The company said that the final release of Medfield this year will be clocked at 2 GHz. Next year’s Atom mobile CPU will offer double the performance of this year’s Medfield processor, and the integration of LTE/HSPA+/2G/3G modems will also help to drive better power efficiency.

Orange says that the Santa Clara smartphone will be shipping this summer.

Intel also revealed that Motorola, which had announced last month in Las Vegas at the Consumer Electronics Show that it will be partnering with the chip-maker, already has prototype Medfield smartphones that are being tested by carriers in the U.S. market. Other manufacturers looking to support Medfield include ZTE, an emerging mobile player from China with aggressive and ambitious plans to become the world’s third largest phone manufacturer in the next three years.