Apple is likely hard at work on the iPhone 5S, and a new rumor indicates that Apple may partner with Intel to produce some of the Apple A7 processor chips that are rumored for the next iPhone.

At this time, Intel is only rumored to receive 10% of the total production of the Apple A7 processor, but if real it could be the first step towards a switch to Intel for the iPhone 6 and beyond.

According to a Digitimes report, which are hit or miss, Apple is looking to Intel and Taiwan Semiconductor Manufacturing Company to shift production of the Apple A7 processor away from Samsung. 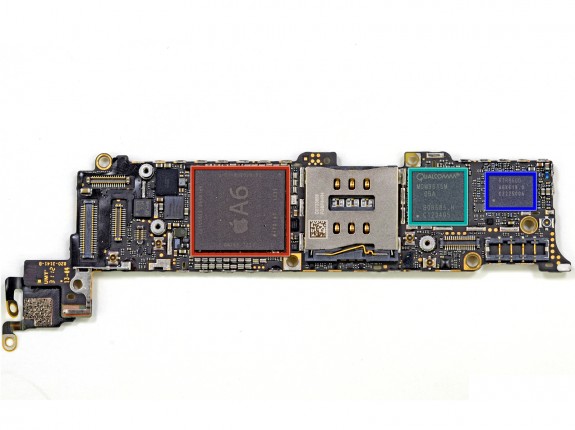 Intel may begin making Apple A7 processors, which may end up in the iPhone 5S. Image via Ifixit

Apple and Samsung are still embroiled in a patent lawsuit, which many believe is behind Apple’s push for alternate suppliers. The process is not something Apple can do overnight. Digitimes cites ‘Institutional investors, who claim, “Samsung is likely to receive 50% of the A7 processor orders, TSMC 40%, and Intel 10%.”

Reuters previously reported that a new Intel CEO could focus on mobile chips, and lead the company towards a deal with Apple.

According to the Digitimes report, Taiwan Semiconductor Manufacturing Company will not begin production of the Apple A7 chip until 2014. No time frame is given for when Intel may start production of Apple A7 processors. If Intel and Apple reach an agreement this could mean ‘Intel Inside’ the iPhone 6 and a future iPad.

Intel is best known for making chips inside laptops, desktops and ultrabooks, but a slowdown in sales of PCs could push Intel into a deeper relationship with Apple. Apple already uses Intel processors in the iMac and Mac line of computers.

The iPhone 5S is rumored to launch in June or July with an Apple A7 processor, which would likely mean Samsung will produce the bulk of the processors for the first run of an iPhone 5S. KGI Securities Analyst Ming-Chi Kuo believes the iPhone 5S will feature an Apple A7 processor as part of the minimal upgrade. Kuo is deeply connected to the Apple supply chain and is generally reliable.

iPhone users may see little immediate difference if Intel is making iPhone and iPad chips, especially if the production is spaces out between three companies.