Yes! Finally, Intel is taking the gloves off and getting serious about getting into the tablet market. At least that’s the message from Intel VP Mooly Eden and to prove he’s serious, he even held up an Intel tablet design at an Intel investor meeting. An Intel-based tablet? Wow! I’ve never owned one or three of those. 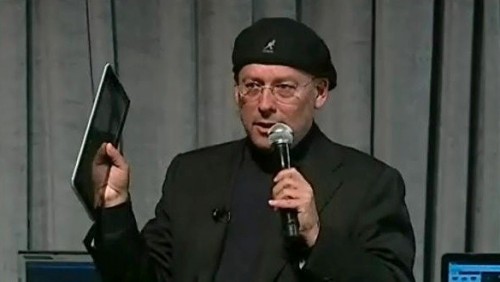 From the Circuits Blog at CNET:

And the first serious Intel-based designs will show up at Computex in June. “People ask me, are you serious about trying to participate in the tablet market? The answer is yes…The message is stay tuned for Computex,” Intel Vice President Mooly Eden, who heads the chipmaker’s client group, said at the Intel investor meeting on Tuesday.

Woo hoo! That’s right, people. Intel is “serious about trying to participate in the tablet market”, and the “first serious Intel-based designs” will be unveiled in a matter of weeks. One question: does that mean these Intel-based tablets I’ve been using until now have not been serious?

I understand you didn’t design the processor in my first tablet, a Pentium III, specifically for tablets, but since then, I’ve used a Core Duo and Core 2 Duo. Just seems weird that vendors keep stuffing your processors into my tablets, and it’s been a joke this whole time. That’s so funny. And what about the Mobile Internet Device form factor you pushed in 2007? I guess those Intel MID tablet designs you introduced weren’t serious attempts either. Good to know. Guess I should hold off on my next purchase of an Intel-powered tablet until you get serious about it.