Microsoft unveiled some new ARM-based tablet designs at Mobile World Congress, but that’s not the only news coming out for Windows 8. While Windows 8 will be Microsoft’s first desktop-class OS to work out of the box with ARM-based CPUs, the company will still maintain support for x86 processors, like those made by Intel and AMD. On the Intel front, blog The Verge is reporting that Intel will be adding specifications for touch screens on its next-generation Ivy Bridge chipset, which will be replacing the Sandy Bridge processors found on many of today’s ultrabooks and the Apple MacBook Air ultraportable computing notebook. 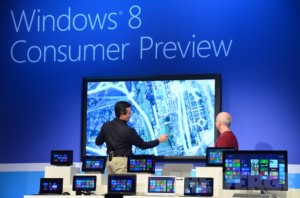 Adding touchscreen support would help to make the Windows 8 experience complete. As Windows 8 spans both devices with keyboard and mice inputs–like many traditional desktops and laptops today–as well as those with touchscreen inputs–like those on tablets–notebooks and desktop PCs that are regarded as more powerful and full-featured devices may miss out on some of the gestures or functionalities of Windows 8 that were designed with touch-centricity in mind. As such, Intel adding touchscreen specs to next-generation ultrabook designs would create a truly portable, full-featured, and powerful computing device that would benefit from all forms of input that are available today on a computing platform.

But it’s unclear still what form factors and designs manufacturers will utilize to add touchscreen support on the already slim ultraportable form factor. In the past, we’ve seen convertible form factors, with screens that rotate, swivel, or tilt to hide the keyboard and change from traditional clamshell notebook into a slate, albeit with added thickness and weight. We’ve also seen slates, detachable designs where the screen and keyboard portion can be removed, as well as simpler integration of touch on a traditional clamshell notebook form factor where the screen is touch-sensitive.

Whatever the case is, in the past, late Apple CEO Steve Jobs had remarked that the touchscreen experience was not designed for laptops. By that, Jobs meant that it would create arm fatigue and a lot of clunky movement for users to manipulate and maneuver their arms and hands between the keyboard and touchpad on a traditional laptop and the touchscreen display. As such, Jobs concluded that touch was best implemented on a large trackpad or touchpad. So while the MacBook Air may be the first device to usher in the ultrabook form factor, it’s safe to probably bet that Apple won’t be adding touch support to its ultraportables despite the support offered by Intel.

Apple, unlike Microsoft, had separated its OSes into two platforms, which gives it the flexibility to offer specific features to each platform. By merging touch and traditional PC functionality into one Windows 8 platform, Microsoft will have to merge support from tablets and laptops so that users from each camp won’t feel left alienated.