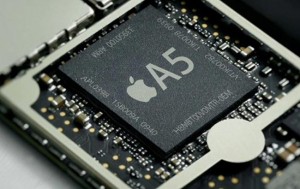 Last week we reported on a rumor that Apple would be ditching Intel processors for the competing ARM processors, a move similar to the Apple’s jump from PowerPC processors to Intel in 2006. The rumor was met with some som skepticism, but not completely ruled out as it would have provided Apple with something the company loves — control.

Well, you can put the Apple + Arm rumor back in the oven to bake. A detailed analysis from David Kanter at Real World Technologies outlines numerous reasons we won’t seen an ARM powered Apple anytime soon. His reasons include performance, business sense, support, cost and the technical issues involved with this type of switch.

If you want the full story, you can read the analysis at Real World Technologies, but we have highlighted the main points below.

Performance – According to Kanter, the ARM chips are currently limited in speed and performance to where the x86 (platform used by Intel chips) where in 2000. Couple this with the fact that ARM doesn’t have the experience with high power chips yet and Intel is a clear leader.

Business Sense – Apple and Intel pretty much renewed their wedding vows when the MacBook Pro landed this year with a Thunderbolt connector. We agree with Kanter’s prediction that Intel wouldn’t be willing to hand Thunderbolt over to an ARM platform anytime soon and Apple wouldn’t likely commit if the company were planning a move to ARM in the next 2 to 3 years.

Support – Apple, developers and consumers would all bear a greater burden if Apple moved notebooks to ARM and left desktops on x86. Based on the company’s success with a non fragmented mobile environment it would be hard to see the company purposefully fragment notebooks and desktops, burdening the entire community and the company in the process.

Technical Issues – Apple may have some chip companies under their belt, but Kanter doesn’t think the company has what it takes to launch a custom AMR chip yet.

So, will Apple ever switch to an ARM processor for its notebook line? It’s always a possibility, but not something we expect to see until ARM delivers significantly faster processors with more benefits to the end user. Kanter suggests that we are more likely to see some form of hybrid system which delivers an iOS emulator or a unification of iOS and OS X with an ARM and x86 powered notebook.

In any event, this change is likely a few years out and shouldn’t affect your current plans to buy a MacBook, MacBook Pro or MacBook Air.