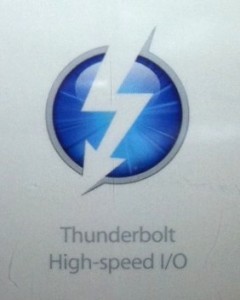 Bits and pieces of rumors are coming together to form a picture that Intel’s new multi-Gb/s, multi-protocol wired interface called Light Peak will be featured in the new Macbook Pro as Apple’s Thunderbolt. Sounds cool, but what does that mean for us?

First, Intel announced they’ll be rolling out Light Peak on Thursday. It was conspicuous that Apple will also be making an announcement that day, presumably for a Macbook Pro refresh. Probably no coincidence there. Sealing the deal are leaked photos from German site fscklog.com (by way of BGR) of the new Macbook Pro and specs that show and list a new port called Thunderbolt.

So what the heck is Light Peak? It’s a new connection type designed by Intel to replace every other connector. Instead of a separate connection type for displays, SATA for drives, USB for peripherals, and so on, Light Peak is intended to replace them all with a high-speed optical connection that can scale up to speeds of 100Gb/s (10Gb/s at launch) and run multiple protocols, meaning it can send raw data, video, audio and other data types simultaneously over a single connection without overcrowding the pipe.

Mobile computer users reap the greatest benefits from such a connection. A single connection can dock a computer to a display, external drive, and other peripherals without rationing throughput. As it becomes broadly implemented, the need for multiple types of connectors and cables will be reduced.

As the name “Light Peak” suggests, it is supposed to transmit data as light over fiber-optics. However, it is rumored that the initial implementation will stick with copper. This is not expected to affect its ability to reach 10Gb/s, but should prevent it from reaching the 100Gb/s maximum potential (which is thought to be at least a decade away). On the other hand, a pure optical connection does not carry electricity, so an implementation completely devoid of copper is unlikely since any USB replacement must supply power.

For right now, Light Peak/Thunderbolt is yet another cable in the headache of connection types. Long-term, however, as it becomes broadly implemented by peripheral makers and Intel’s other partners, it should reduce or eliminate much of that pain.