According to those involved in creating Microsoft’s Metro version of Internet Explorer 10, the company took some inspiration from Apple’s iPad.

This news comes by way of ArsTechnica who interviewed Roger Capriotti, a marketing director at Microsoft. In the piece he goes into great details about why the company focused on creating a “touch first” experience for Internet Explorer 10.

The development process began when research showed that a large number of users spend the majority of their time browsing websites inside of Safari on their iPads instead of using specialized applications. With that in mind, the company set out to build a user interface that worked very well with touch. 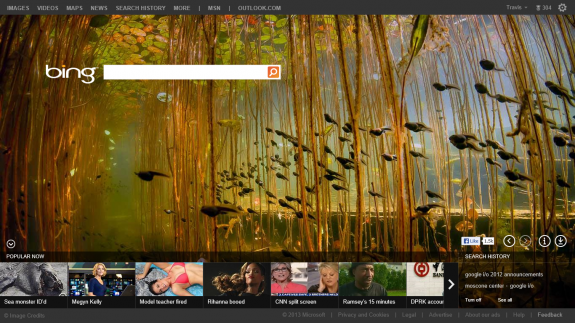 Internet Explorer 10 completely hides all elements other than the website itself so that designers can create immersive experiences, like in this example using Bing.

According to Capriotti, the company realized that “the tablet browsing experience is often left unstellar compared to the apps experience that you might have on these devices.”

Next, the company partnered with research firm Peen Schoen Berland to survey iPad users on what problems they experienced when browsing the internet. Of the 1,500 iPad users that Berland surveyed, it found that 80 percent said that they had major issues with the way browsing in Safari on the iPad worked.

A second study with Moziac Group focused on gauging these iPad users’ experiences when using Internet Explorer 10 on a tablet. According to Capriotti, many of these users were interested in replacing their iPad for a Windows 8 tablet based on their experiences, mainly because these users loved that the site they were browsing was in full screen instead of having to share screen real estate with a navigation bar and tabs.

“If you take an iPad user… and show them [Windows 8] browsing, they get super excited about things like full-screen… the fact that my website is front and center and I’m not sharing it with a bunch of tabs along the side”, said Capriotti.

Microsoft also commissioned a study through Principled Technologies that was aimed at measuring the amount of time it took users to perform tasks in Internet Explorer like booking airline tickets, sharing things on Facebook and shopping. This study found that Internet Explorer 10 was 60 to 65 times faster than performing those same tasks on the iPad.

Microsoft also made moves to support some of the web standards that Safari for iOS supports in an effort to ensure that it was compatible with many of the sites these users already frequently visit.

While the touch first experience of Internet Explorer may have enhanced the browser’s reputation with tablet users, the approach may have also alienated those looking to browse the internet using the Metro application with a keyboard and mouse. Because none of the browser’s controls are available, doing something as simple as opening a new tab or closing a site takes at least one more click or gesture than it does in the desktop version of Internet Explorer 10.