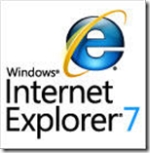 We’ve all been beta testing Internet Explorer 7 for quite some time. Although I have FireFox installed, I primarily use IE 7 and am thoroughly enjoying the new features like an integrated RSS reader, tab support, and more. Microsoft is set to officially release Internet Explorer 7 by the end of October .

IT Administrators need to start preparing their organizations for this update. In addition to preparing for the update, Microsoft has also  implemented a blocking measure for those IT Administrators wishing to block the automatic update and installation of IE 7.

Additional information can be found here.

In addition, here is some information I received directly from Microsoft on the upcoming release of IE 7:

Shortly after it is released, Microsoft will distribute IE7 as a high-priority update through Automatic Updates to help consumers become more secure and up-to-date. However, to ensure that customers are prepared to upgrade, IE7 will not install without user consent. Microsoft recognizes that, as part of a managed deployment plan, some organizations may wish to block users from receiving IE7 through Automatic Updates and is providing an IE7 Blocker Toolkit.

Ã¢â‚¬Â¢November 1, 2006 – date by which customers wishing to block Automatic Updates delivery of IE7 should have blocking measures in place