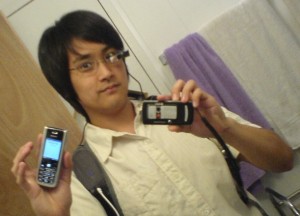 UMPCPortal sits down with the creator of a computer rig that lets you walk around and downloads more data on how it came about. You’ll remember user designate FiveSeven808 and his wearable computer rig from their initial post several weeks ago. This presumably is the interview teased in that debut.

The interview goes into the design of the rig (powered by a Sony UX380N before its demise), step-by-step, piece-by-piece. No way to properly summarize it, but this particular Q&A exchange jumped out at me.

UMPCP Ã¢â‚¬” Q: That is all done with Bluetooth?

Fiveseven808 Ã¢â‚¬” A: Yep, all done with Bluetooth. Through use of my system, I found that ANY wires at all, is a pain, and makes the system less useful. Display is an exception since I cant find/make a receiver small enough to fit inside the glasses or around neck.

I like the sound of that. Also details his input system, runtime on his battery pack, component cost, and how he customized that MyVu display, as well as speculation on the future of augmented reality.