Researchers in Germany are working on next generation hardware concepts that could lead the way in a push for what they’ve dubbed Morphees: devices that have changeable form factors enabled by bendable screen technology.

According to the research itself, a morphee is a “self-actuated flexible mobile device.” Depending on the use case, these devices would be able to transform themselves into different shapes. Instead of enabling more form factors, the Morphee research aims to enable app developers to create applications that could better take advantage of the shapes the technology would be able to create on the fly. 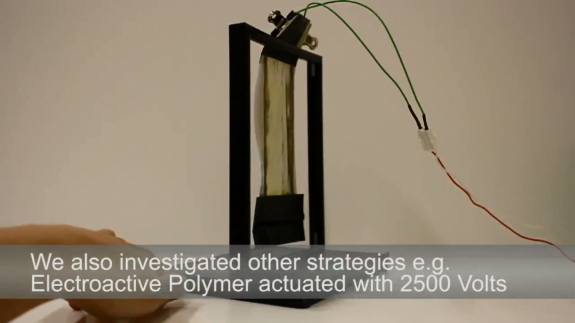 A Morphee as Shown in the Research

The Morphee research proposes using something called NURBS, or Non-Uniform Rational B-Splines, to have a device interpret shapes using straight lines and curves in a sort of mesh grid. Using calculations managed by control points in the grid, particles are able to determine the shape being formed.

The group produced a short video on the subject below.

Flexible screens have been a work in progress for some time. Samsung was in the process of commercializing its own Flexible AMOLED technology early last year. That technology would have allowed new possibilities for device form factors like smart watches and slightly curved smartphones.

Read: Flexible Smartphones Could Be in Your Pocket Next Year

Samsung showed off a prototype device codenamed “Youm” at this past year’s CES. As of that showing the company is still likely pretty far away from delivering an actual device to users.

In order to make morphees a reality, manufacturers would also need a way to power devices based on the research. The Ulsan National Institute of Science and Technology of South Korea announced that it had been able to produce the first bendable lithium-ion batteries in the world earlier this year.