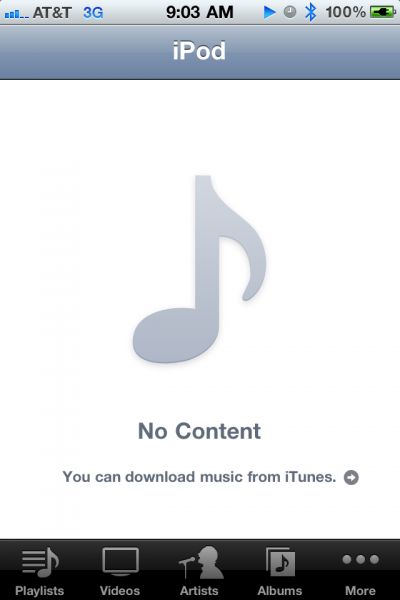 There’s a bug that can zap the iPod app on an iOS device updated to 4.2, preventing it from seeing the stored media. The media seems to still be there, but the iPod app doesn’t recognize it. Fortunately, the fix is already in.

I had read about this yesterday, but forgot to check after I updated my iPhone to iOS 4.2. Not sure why this slipped my mind since I did check my photos for deletions. Regardless, the damage was done and now I’m without a music backup if Pandora hits a glitch. At least until I get home and re-sync.

The fix, as reported on the Apple support forum, requires connecting your iDevice to the computer with which it syncs, playing one of the songs (or at least part of it) from the device through iTunes, then syncing. A commenter on Lifehacker reports that a sync without playing a song also works. Seems to be a matter of re-authorizing the device since the media still seems to be there, which is further supported by another commenter who sync’d to a computer without media.

On a similar note, the Camera app on my iPhone asked for permission to use my location, which I have always allowed in order to geotag my photos. Strange that it would reset.

Haven’t noticed any other weirdness after the update. In fact, everything worked so smoothly after the update last night, I wasn’t even sure anything changed. But this morning, I got a coupon for 50% off Robeks (local Reston, VA only). The coupon web page included a button to print. Sure enough, tapping on the button brought up the print function. Almost tempts me to run out and get an AirPrint-compatible printer (almost but not quite — Robeks will accept the coupon if I show it to them on-screen).