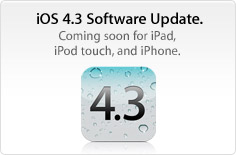 Right alongside the Apple iPad 2 announcement, Apple announced that iOS 4.3 will be available for the existing iPad owners, and will come installed on the iPad 2. The new version of iOS packs in several features and improvements that will make it worth upgrading.

The first improvement comes in the form of the a better browser experience. The new iOS 4.3 operating system has a new version of Safari which uses the Nitro Javascript engine to deliver 2x faster than on previous mobile versions of Safari.

With iOS 4.3, you will now be able to access the music movies and media that you have stored on your computer, without the need to transfer over and take up precious space on your iPad. No word on whether this will work outside of the home, on a different network, but we’re guessing it will be a same network service.

In IOS 4.3 AirPlay will allow for more transitions when sharing photos and now will also support streaming video from apps in the App store and even websites.

Apple is giving users a choice, yes we know a bit rare, and allowing users to control what the iPad switch does. With iOS 4.3 the switch can mute the iPad, or it can lock the orientation. This is a welcome change.

iOS 4.3 will be available on the iPad on March 11th as a downloadable update and will ship on the iPad 2. It is also likely to arrive on the iPhone 4 at that time.