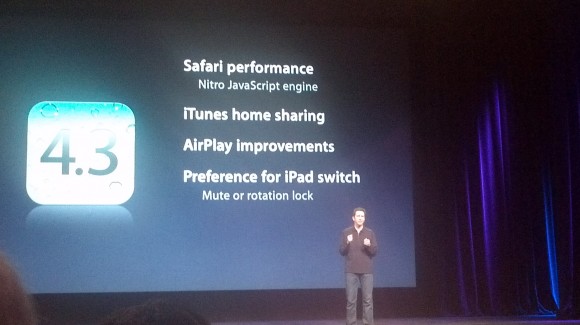 In addition to sharing digital media content via Air Share, which will allow Mac OS X and iOS users to share what’s on their devices with Apple TV to stream it to a larger HDTV wirelessly over WiFi, Apple will also be introducing a new feature called Home Sharing to iOS 4.3, which was briefly talked about in San Francisco by company CEO Steve Jobs during the iPad 2 unveiling.

According to Jobs, Home Sharing is a feature that works somewhat in reverse of what Air Share does. Essentially, rather than push content on the iOS devices–iPhone, iPod Touch, and iPad–to Apple TV, it allows the iOS devices to pull content wirelessly from connected Macs inside a home. For instance, the iMac in my den has a movie that I want to see on my iPhone when I am laying down on the couch. Rather than getting up and synchronizing the movie over via iTunes–a rather laborious process if all you want to do is watch a movie on your iPhone next to you on the couch–you can just pull the content from your iMac. Since the devices are connected over the same WiFi network, it should be a cinch.

The feature in itself is not novel, but is definitely noteworthy. In the past, there are several apps that have attempted to offer similar functionality to the Home Sharing feature on iOS 4.3. The noteworthy thing with Apple offering the feature now is that with the given rumors of a digital locker service for cloud-based storage of media files coming soon to iTunes and Mobile Me, Home Sharing can essentially be paving the way for Cloud Streaming, which would allow Apple to store your digital content on a cloud and access it anywhere you have wireless connectivity. This would free up access to content when you’re away from home and would make iOS devices be less dependent upon the finite amount of expensive flash-based memory. Rumors of an Apple digital locker service say that the offering is expected to arrive in Spring.