Users of the previous three versions of the iOS 5 beta may have noticed that the promised “Documents in the Cloud” feature was, up to this point, missing from the party. With today’s release of the fourth iOS 5 beta though, the folks at 9to5Mac point out that Cloud Docs support is now active.

Documents in the Cloud centers around the iWork apps on iOS (Pages, Numbers, and Keynote). Cloud syncing will eventually happen behind the scenes between all iOS and Mac devices that are registered under the same iCloud account. So if you’re writing an essay on Pages on your new MacBook Air, you can open the same application on your iPhone and it will be there. Open Pages on your iPad or iPod touch, and your prized essay will be waiting there too. 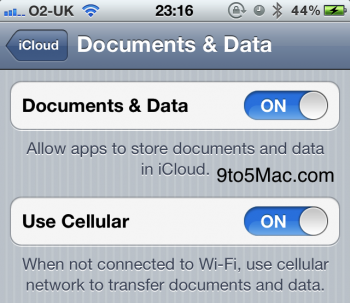 The timing of activating the Doc Syncing abilities in this beta likely have to do with this week’s release of Mac OS X ‘Lion.’ With iCloud integration in Lion, the pieces are in place for one of Apple’s broadest visions to come to fruition. One of their goals has always been to keep users as far away as possible from a computer’s file system. Their philosophy of we’ll handle the file system, you just sit back and enjoy the result shows more than ever with Docs in the Cloud (and the rest of iCloud). Users will be so far away from the file system that they won’t even have to open a “documents” folder within the app. From Apple, regarding iCloud:

Apps make it possible to create amazing presentations, write reports, and more right from your iOS device. You don’t have to manage your documents in a complicated file system or remember to save your work. Your documents are just there, stored in your apps, and ready whenever you need them. And now, your apps can store that information in iCloud. Which means you can access your documents — with your latest updates — on whichever device you happen to be using at the time. Even better, this all happens automatically, without any effort from you.

Devs and other beta testers can start playing with this feature today. The rest of us will have to wait until (probably) September to experience the “magic” of iCloud doc syncing.

Have any of you devs tried out doc syncing in iOS 5 beta 4 yet? Is it active between Lion and iOS devices yet? We’d love to hear all about it in the comments.