Yesterday’s upgrade to iOS 5 on my iPhone 3GS was a rough experience for me but not for the reason that I was expecting. I went into it thinking that because I had a two year old iPhone model, I would have all sorts of issues with an operating system that Apple promised would be its best yet. My fears were based on the past experiences of friends who installed iOS 4 on their iPhone 3G.

If you recall, iOS 4, at least for a lot of owners, made the iPhone 3G sluggish to the point where it was virtually unusable. I figured that iOS 5 would be a similar experience on my iPhone 3GS. 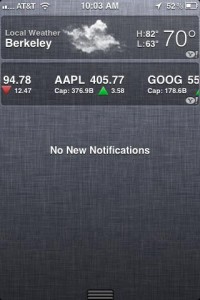 After six hours, and countless ‘Error 3200’s, I got the operating system installed. I gulped, pushed the button indicating that I was ready to upgrade my device and prepared myself for disappointment.

With everything set up – iCloud, Find My iPhone, etc – I swiped to the home screen for the first time and began poking around, putting some of the new features to the test and looking around to see what, if anything, was missing.

I’m about 13 hours into my experience with iOS 5 on my iPhone 3GS and I couldn’t be happier. iOS 5 works great. It’s snappy, apps load up as normal, battery life remains the same from what I can tell, and I can’t find any features missing besides some of the camera options that will be afforded to iPhone 4 and iPhone 4S users.

Siri, of course, isn’t here either.

But what is here is great and far and away better than iOS 4 which was a great operating system in of itself.

Now, again, I am only 13 hours into my experience so it’s possible that over time, iOS 5 could end up letting me down, but so far so good.

I’ve had a lot of people write in to express their fears about installing iOS 5 so hopefully my experience will convince you to give it a go, if you haven’t already.

And for those of you that already have, how is iOS 5 treating the rest of you with an iPhone 3GS? Or am I the only person (definitely the only tech blogger) on earth still rocking one of these?