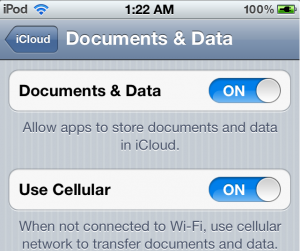 Today’s iPod Touch is the lesser sibling of the iPhone, eschewing the more expensive device’s cellular radios and GPS functionality, but iOS 5 reveals clues that the iPod Touch will come with a cellular radio and GPS toggle switches.

Rumors of a 3G-enabled iPod Touch without voice capabilities, like the 3G-enabled iPad, have been going strong, and now features found in the latest developer beta of iOS 5 shows that a mobile broadband radio inside the slim touchscreen portable music player could be a likely reality in the feature. Within the documents and data settings, which Beta 4 unlocks to documents in the cloud, users can now toggle cellular radio settings to turn on or off mobile broadband connection. As current generation iPod Touch devices lack a modem, the move can be a slip from Apple as it has not optimized the version of iOS for the iPod Touch and is showing features carried from the iPhone, or it could signal the future of the iPod Touch product line. 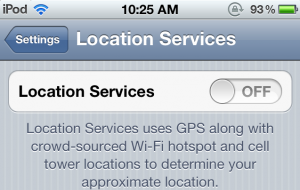 As the 3G mobile broadband radio inside the iPad 3G enables GPS capabilities, it appears that GPS features will also be making its way into a 3G iPod Touch, if and when Apple releases such a model as inferred from the iOS beta 4 software. Having GPS on-board will allow for more accurate location-based apps, such as check-ins into Facebook, Google Places, Foursquare, and others, as well as allow for better geo-tagging when using the iPod Touch camera. Additionally, with GPS, the iPod Touch could begin to replace stand-alone car navigation units made by Navigon, Garmin, TomTom, and others. The device could be loaded with voice guided turn-by-turn GPS apps for navigation capabilities, similar to the iPhone.