On October 23, 2001, Apple had asked the world to say ‘goodbye to your hardrive’ with the debut of the first iPod, a consumer device that propelled the digital music revolution and made Apple a household name. Almost a full decade later, Apple continues to ask the world to bid adieu to their hardrives, but this time with iOS 5 and iCloud, the iPod chapter may be coming to an end as Apple is now focusing on connected devices in the iPhone and iPad.

iOS 5 will signal a new era in Apple’s history as the company is no longer pre-loading iPhones, iPod Touches, and iPads with the ‘iPod’ app. Instead, music and video will now be broken up, each with their respective Music and Video app, and purchases are still handled on the iTunes app as well as the App Store for apps.

While the iPod franchise will continue for some time into the future, the change marked by iOS 5 signifies Apple’s less reliance on the iPod franchise. Sales of portable music players have declined in recent years, and companies have migrated away from stand-alone devices like MP3 players in favor of connected, multi-purpose devices like the smartphone. That’s no surprise given that the smartphone market had made the PDA business extinct some years ago. Given that the iPod brand and franchise was so important and iconic for Apple, its slow death shows that the iPhone and iOS platform is both mature and ready to bring a whole new era of ‘post-PC’ computing for Apple. 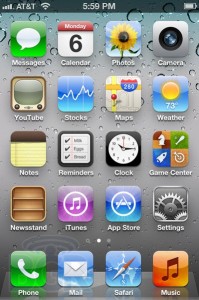 In launching the first iPhone, Apple had relied on the iPod brand to bring in customers. The first iPhone was described as the best iPod, and Apple had tried to give the PMP market a new lease on life by switching to touchscreen technology with the iPod Touch. Now, a few years later, the important function–music playing–of an iPhone is no longer as important for consumers. Apps, the mobile web, and instant access to information, content, and the world through news and social networks are now defining the iPhone generation. While geeks clamor about high-end features like multitasking, tethering, and openness (via jailbreaking today), consumers really just care about connecting, and perhaps that’s the defining characteristic of the iPhone–the phone and its mobile broadband modem.

So while the iPod kept your music on your device, the iPhone brings it to the cloud. While the iPod made music personal with cool, iconic white earbuds, the Phone dares you to blast your music through built-in speakers and public playlists on Pandora and Last.fm. And even though the iPod promised an endless playlist with mass gigabytes of storage through huge, yet small hard drives, the iPhone’s svelte flash storage and cloud streaming dares you to live on the wireless edge.

So while iOS 5 signifies the end of the iPod era, music, videos, playlists, and personalized streams of tunes that fill dead air and empty space still live on. The spirit of the iPod will forever be a part of the iOS ecosystem. Best exemplified by The Beatles, to the iPod, you say goodbye, I say hello.