Apple has rolled out the iOS 6.0.1 update to iPhone, iPad and iPod touch owners today, its first update since its released iOS 6 and its 200 new features to the public back in September.

The iOS 6.0.1 is a major bug fix update and one that iPhone, iPad and iPod touch owners have been looking forward to since the release of the software. The update promises to squash many of the bugs that have been plaguing device owners for more than a month.

Two of the bugs that were fixed are the Wi-Fi bug that was preventing some iPhone 5 and iPod touch owners from connecting to their home Wi-Fi networks and the keyboard bug where some owners were seeing horizontal lines displayed across the keyboard.

In addition, Apple says that the update will take care of cellular reception problems that some iPhone owners had been experiencing since upgrading to iOS 6 as well as an issue that prevented the camera’s flash from going off. 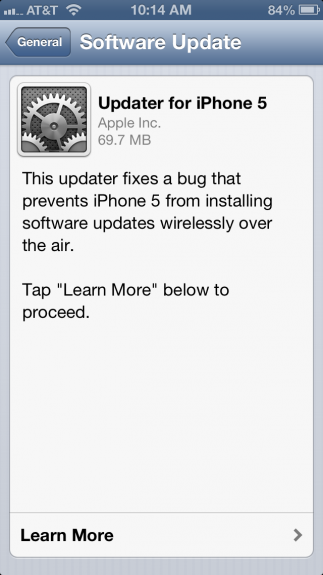 This prompt will greet iPhone 5 owners.

Once the downloader is installed, the iOS 6.0.1 update will be automatically prepared and installed as normal. The prompt looks like this, and it will only take a few seconds to download. Once that it complete, iOS 6.0.1 is there for the taking, an update that will likely make the experience on the iPhone 3GS and up, iPad 2 and up and iPod touch fourth-generation a much better one.

Owners of those devices can either update through the device Settings by checking for an update in the Software Update section. The update is fairly small so it shouldn’t take too long to download over the air. 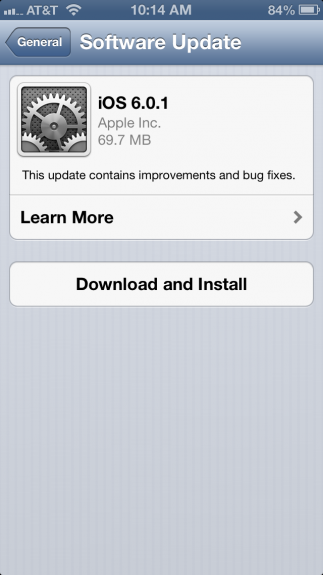 Those that wish to do it the more traditional way can still update their device to iOS 6.0.1 over iTunes. So while there might not be new features within iOS 6.0.1., there are certainly a host of fixes that should make for a more stable experience across Apple’s iOS devices until Apple releases another piece of software.

iOS 6 is Apple’s latest mobile operating system and features a number of upgrades including Facebook integration, more features for Siri, a useful Do Not Disturb feature, Passbook, and more.