Apple has released the latest version of iOS 6, dubbed iOS 6.1.2, for owners of the iPhone, iPad and the tiny update promises to fix an Exchange calendar bug that caused increased network activity which drained battery life for some owners of the Apple’s mobile products.

Last week, Apple, in the wake of user and company complaints about an Exchange calendar bug that was seemingly affecting the battery life for users of its mobile devices, promised a fix for the issues in the near future. A report claimed that the software would be released in the early part of this week, specifically by February 20th and it looks like that information was dead on. 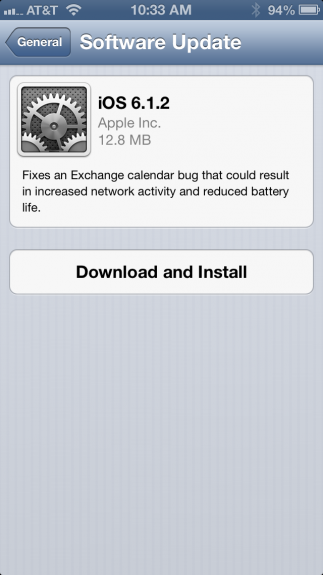 iOS 6.1.2 has been released to iPhone and iPad owners.

Today, Apple rolled out iOS 6.1.2 that is aimed squarely at tackling the Exchange issue. Apple says that the 12MB (for iPhone 5 owners, larger for others) update “fixes an Exchange calendar bug that could result in increased network activity and reduced battery life.”

The arrival of iOS 6.1 last month brought the bug the Exchange bug with it. Exchange is an email service that is used by companies all over the world and thus, many users were advised not to install the software until Apple patched the issue up.

It looks like it did so this morning with this new update which should return the devices of iPhone and iPad owners back to normal. The software evidently does not fix the iOS 6.1 security bug, one that allowed users to bypass the lock screen using the Emergency Call button. Gotta Be Mobile was unable to replicate the bug either in iOS 6.1 or in iOS 6.1.2.

Those who are jailbroken on iOS 6.1 or iOS 6.1.1 should be weary of downloading iOS 6.1.2. Users are advised to wait until the all clear is given before installing the new software.

Owners of the iPhone, iPad and iPod touch that are not jailbroken can proceed to download the software at their own risk though there is always a chance that the software has brought along even more issues as iOS 6.1 did back when it was released earlier this year.