Apple released iOS 6.1.3 last week, delivering an updated version of the iOS 6 software that powers the iPhone, iPad and iPad mini. In this post I take a look at the iOS 6.1.3 performance on the iPad mini, to see how the iPad mini handles Apple’s latest bug fixes.

Apple includes a number of fixes in each small iOS update, and with iOS 6.1.3 Apple promises to fix a lock screen issue on the iPhone and deliver map updates for Japan. But like most iOS updates, iOS 6.1.3 delivers other small fixes and tweaks not mentioned in the release notes. 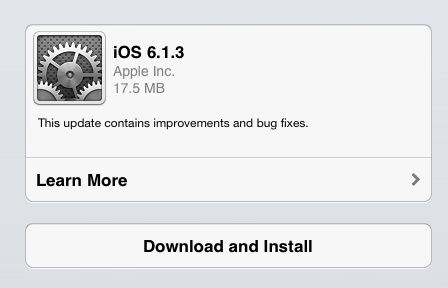 The iOS 6.1.3 follows several other swift updates to the iPad mini. Apple launched the iOS 6.1 update in January which brought new features like the ability to buy movie tickets from the iPad or iPhone but it also brought a number of bugs which Apple is trying to stamp out with smaller updates for the iPhone and iPad.

Thanks to the earlier issues some users may be waiting to see iOS 6.1.3 performance details and battery life reports before upgrading their devices. It’s possible that iOS 6.1.3 is the last small update for iOS before Apple announces iOS 7, the rumored major upgrade for the iPhone, iPad, iPad mini and iPod touch. 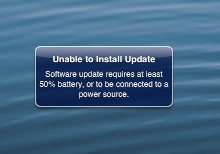 The iOS 6.1.3 update on the iPad mini was a quick download, clocking in at 17.5MB. It was easy to quickly download the update over WiFi in about 5 minutes.

Once plugged in it only took a few minutes for iOS 6.1.3 to install and for the iPad mini to restart and be ready for use.

After nearly a week of using iOS 6.1.3 on the iPad mini I am impressed with th performance of this most recent update. My iPad mini has not been afflicted with the many problems that my iPad 3 has, but I still update with caution — especially since there is no going back to an earlier version of iOS.

I have trouble connecting my iPad 3 to WiFi, but the iPad mini still holds a strong and fast connection to WiFi at home and on the go. This has not changed with iOS 6.1.2 or iOS 6.1.3.

The WiFi issues of the iPhone 5 and iPad 3 appear to be hit or miss and despite several iOS devices on the home router only one consistently experiences issues.

I have a 4G LTE iPad mini which means I have a backup for WiFi and the ability to use it as a personal hotspot that lasts for a full day. After the iOS 6.1.3 update 4G LTE remains strong and connectivity is better than my iPhone 5, both which are on Verizon.

iPad 3 and iPad 4 users are reporting sound issues on iOS 6.1.3, but everything is working fine on my iPad mini.

The user interface on the iPad mini and the performance of stock apps like iMessage are good. There is no slow down to the overall use of the iPad mini with iOS 6.1.3 and I am not experiencing the iMessage sluggishness Adam Mills reports on the iPhone 5 running iOS 6.1.3.

iOS 6.1.3 battery life on the iPad mini is good, in fact it may be slightly improved. During the last week I used the iPad min ias a personal hotspot for 6 hours and barely registered the usage when it came time to check the battery life.

The biggest drawback to the iOS 6.1.3 update is that it cuts off access to use the evasi0n jailbreak tool which offers access to Cydia and a number of great iPhone and iPad tweaks.

The iOS 6.1.3 update closed one or more of the exploits used by the iOS 6.1 jailbreak, and likely means no more jailbreaking until iOS 7 arrives.

Users with an iPad mini and an iOS 6.1 jailbreak should not update to iOS 6.1.3 unless they are ok with losing access to Cydia apps and Cydia themes.

IOS 6.1.3 is worth downloading for most iPad mini users. There appear to be few new issues, and there is a chance that the iOS 6.1.3 update will fix things not noted in the official release notes.

The only users who should avoid this are users with a jailbroken iPad mini or users who are using an iPad mini from work that may need approval for the update.