Yesterday, Apple released its latest update to iOS 6 and iOS 6.1 in the form of iOS 6.1.3. The update, which rolled out to owners of all iPhone, iPad and iPod touch models running iOS 6, was a small update, but as we’ve seen Apple’s iOS updates, even small iOS updates can bring unforeseen problems. After spending some time with the latest update, it’s time to delve in and see just how the iOS 6.1.3 update performs on the iPad.

In late January, Apple rolled out its latest and greatest update to iOS 6, iOS 6.1, an update that brought, for the first time, some new features to Apple’s latest mobile software. While the features weren’t as substantial as past iOS .1 updates, the features were a nice addition, particularly the new lock screen music controls which are vastly improved, particularly on the iPhone, from the previous ones.

In addition to those new features though, iOS 6.1 brought some trouble along with it. Shortly after its arrival, owners of the iPhone 4S started experiencing 3G connectivity issues and owners of iPhones and iPads running iOS 6.1 started reporting devastating battery drain.

Apple almost immediately tackled the 3G connectivity issues by pushing an iOS 6.1.1 update to iPhone 4S owners shortly after the arrival of iOS 6.1. The battery drain issue was soon discovered to be caused by Exchange, specifically, a bug within its calendar that caused devices to connect an absurd number of times to the server, causing severe battery drain.

The company attempted to tackle this issue with iOS 6.1.2. As we told you though, we heard from not only iPhone owners, but iPad owners as well who were experiencing battery drain even after updating to iOS 6.1.2.

However, given the problems that past iOS updates have brought though, there are likely iPad owners out there who are waiting to hear feedback about the update before installing the new software. Here, we take a look at the iOS 6.1.3 update for the iPad, particularly the third-generation iPad, to see if it has brought more harm than good and whether or not it’s safe to install. 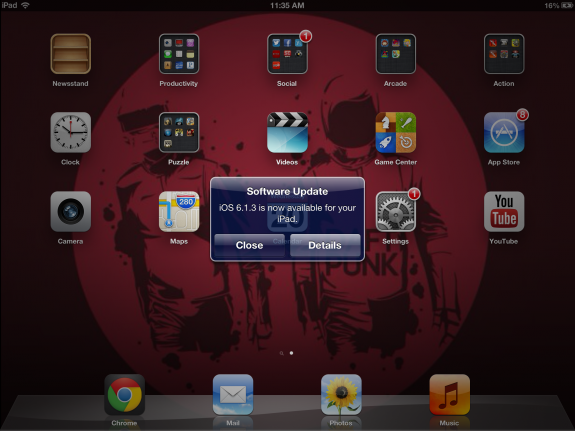 Instead of a status bar showing me the progress of installing the update, right after agreeing to Apple’s terms, the iPad rebooted and started to install the update. I honestly did not even have time to see the software download, it was that fast. I honestly cannot remember the last time this happened, so this may be the fastest I’ve ever seen an iOS update installed on my iPad.

It’s also something to keep in mind for those that might be prompted by the OTA update. If you’re in the middle of something, make sure you save because it could be that you won’t have any time to back out of the update’s installation process.

After both the iOS 6.1 and iOS 6.1.2 updates for the iPad, we heard from iPad owners who were reporting abnormal battery drain. A few of those were being caused by the Exchange calendar bug that was discovered within iOS 6.1 and others seemed to have no connection.

As someone who does not use Exchange, it’s impossible for me to verify whether or not the issues that iPad owners were having were rectified with iOS 6.1.3, but from the good news I’ve heard from iPhone owners and the lack of complaints on the Apple support forums from iPad owners, I get the feeling that these issues may have been resolved. 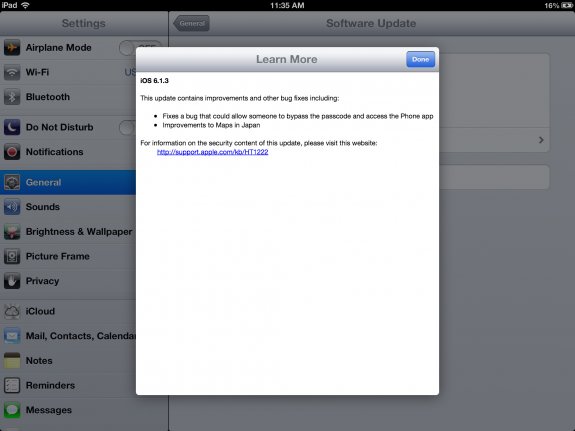 Lingering battery life issues may have been addressed as well.

It appears that there are a few people on the support forums complaining about poor battery life after iOS 6.1.3, but the don’t explicitly mention Exchange and for the most part, things are quiet. My suggestion is, as always, to let the battery run down to 0% and recharge it to 100% and see how it performs from there.

If it’s still acting funny, do a Factory Reset and things should return to normal.

Oddly enough, it sounds like iPad owners, iPad 3 owners in particular, have been having some sound issues with their iPad. Some have said that the issues arose after installing iOS 6.1.2 and that while they hoped that iOS 6.1.3 would fix the issue, it apparently did not.

Obviously, not having any sound coming out of a device like the iPad, which is perfect for gaming and listening/reading books, is not ideal. However, I’ve experienced no such problems with my iPad after iOS 6.1.3. Sounds are working properly. 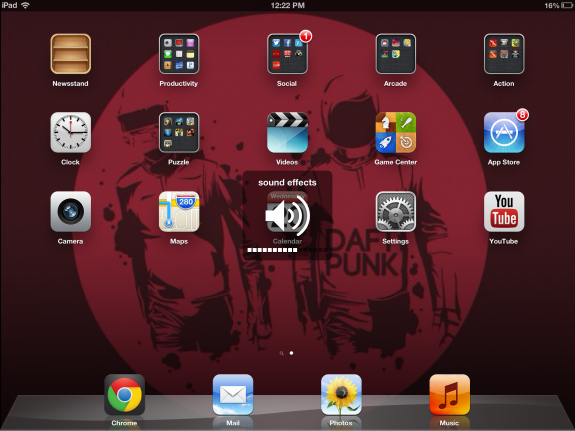 The sound on my iPad 3 has been working properly since installing.

Users are reporting a fix for the issue and if you’re experiencing no sound after iOS 6.1.3 or a previous update, try heading into Settings>General>Reset>Reset All Settings.

If that doesn’t work, it might be time to bring the device into an Apple Store for treatment.

There have been all sorts of complaints about Wi-Fi connectivity after iOS 6 and its many updates and while I experienced them after updating to iOS 6, I haven’t had any issues since Apple issued some initial fixes to iOS 6 in the months after its release.

After installing iOS 6.1.3, my Wi-Fi connection remains strong and I haven’t experienced any drops or laggy connections in the hours since I’ve been running the new software.

Those that are still experiencing issues will want to head to this thread in order to find one of the many working remedies for the issue.

So far, so good with iOS 6.1.3. While several major issues were uncovered after iOS 6.1 arrived, iOS 6.1.3 doesn’t seem to have brought any nasty bugs along with it which is a good thing for those toting the iPad 3 and other versions of Apple’s slate. That’s not to say that bugs won’t be discovered down the road but thus far, there don’t appear to be any big security breaches or catastrophic issues with the software.

That said, iOS 6.1.3 is a recommended update for iPad owners, particularly those that may be experiencing battery life issues on iOS 6.1.2. iOS 6.1.3 doesn’t appear to have brought any issues of its own so it likely can only help not hurt.

Throw in the fact that it doesn’t have any major issues and it’s an update that is worth installing for everyone but those that want to jailbreak their iPad 3 or iPad 4. 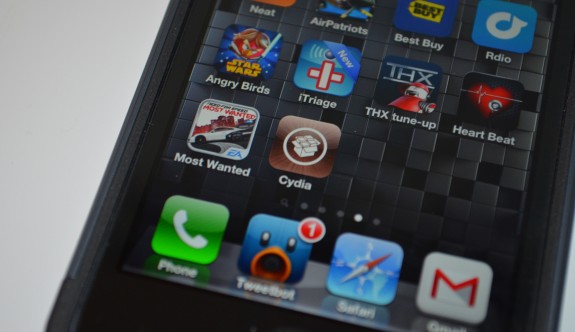 Those looking to jailbreak their iPad will not want to install iOS 6.1.3.

iOS 6.1.3 has patched up the exploits used by the Evadr3s team and its Evasi0n jailbreak. Those that wish to jailbreak their iPad will need to remain on iOS 6.1.2 in order to do so while those that are already jailbroken will of course not want to update to the latest version of iOS.

For everyone else, the update appears to be safe to install.