iPhone 5 users will see a prompt to update to iOS 6.1.4 today as Apple pushes out an update that brings speakerphone enhancements and nothing else worth mentioning in the release notes.

The new version of IOS 6.1.4 is available now as an Over the Air (OTA) update and to users that plug into a computer with iTunes installed.

The iOS 6.1.4 release notes indicate that there is an “Updated audio profile for speakerphone” in this update. In our quick before and after testing of the speakerphone on iOS 6.1.3 and iOS 6.1.4 there was not a major difference, but one test call we noticed less background noise. 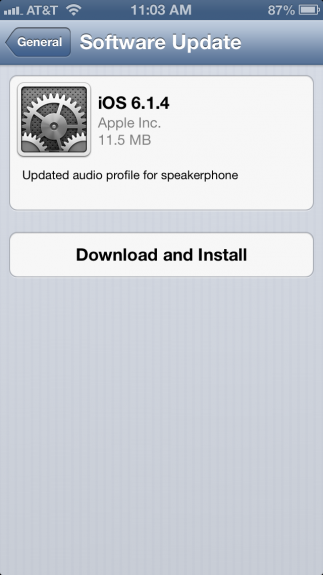 If Apple is addressing any of the iOS 6.1.3 problems that are frustrating users, it’s not noted, but Apple is known for including other small enhancements in some updates.

A portion of iOS 6.1.3 users complain of exchange problems which drain their battery life, a problem that carried over from iOS 6.1.2.   This issue is shown in the video below.

The iPhone 4, iPhone 4S, iPod touch models and the iPad 2, iPad 3, and iPad 4 are not getting this update and remain on older versions of iOS.

iPhone owners using the iPhone 5 jailbreak to run tweaks and Cydia themes should avoid this update as Apple broke the jailbreak with iOS 6.1.3.

This may be the last iOS 6 update Apple releases before the upcoming iOS 7 software. While Apple could push an update to fix security issues or address other problems it is possible Apple will show off iOS 7 in early June and bring it to the iPhone 5 and other Apple devices later this fall.