Last week, Apple rolled out its iOS 6.1.2 update to owners of the iPhone, iPad and iPod touch in an effort to quell the Exchange issues that had been plaguing owners since the release of iOS 6.1. However, it’s now clear that the iOS 6.1.2 has left a number of bugs lingering on the iPhone including two security issues and evidently, Exchange issues as well.

After the roll out of iOS 6.1, owners of the iPhone began complaining about a number of issues including battery drain and issues with 3G connectivity on the iPhone 4S. Apple moved quickly to soothe owners experiencing the issues and promised fixes in the near future.

The first, was the iOS 6.1.1 update for the iPhone 4S which was aimed at fixing the 3G connectivity issues that iOS 6.1 brought along with it. The second fix came in the form of the iOS 6.1.2 update which rolled out to all iDevice owners last week with the intention of killing an Exchange calendar bug that caused increased network activity which led to battery drain problems.

Surprisingly, the update did not tackle one of the lingering problems from iOS 6.1, namely, a security flaw that allows unwanted users to access a device running iOS 6.1 through the lock screen. And now, just a few days after the update rolled out, we’re hearing about other bugs, some new, some old, that are evidently impacting iPhone owners.

In addition to the Exchange battery drain and connectivity issues, some intrepid iPhone owners discovered a security flaw in iOS 6.1 that allowed users to by pass the lock screen passcode simply by performing a few steps involving the power button and the Emergency Call button.

This vulnerability allows users to bypass the lock screen passcode and access the phones photos and contacts. It’s a serious issue and one that many assumed Apple would address in the iOS 6.1.2 update. Only, the iOS 6.1.2 update did not bring a fix for that security flaw, or it seems, another security bug that was discovered lurking in iOS 6.1.2 today.

The new bug was discovered by Benjamin Kunz Mejri, the founder and CEO of Vulnerability Lab, who, according to Kaspersky, detailed the flaw on the Full Disclosure Mailing list.

And while the new bug uses many of the same steps of the first flaw, the result is different. The new bug turns the iPhone screen black which allows users to plug the phone in using a USB cord and view photos and contact information in iTunes without having to bypass the lockscreen passcode. 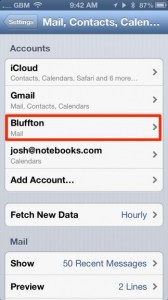 Exchange issues are persisting in iOS 6.1.2 it seems.

iOS 6.1.2 also promised to fix issues with an Exchange bug though it appears that it may not have worked for everyone who installed the update. Gotta Be Mobile was contacted by an individual who claims that an iPhone 5 running iOS 6.1.2 contacted his company’s Microsoft Exchange 2003 server in the neighborhood of 50,000 times.

As expected, the battery life on the iPhone 5 took a significant hit. The Exchange log has been passed along to Apple and he is hopeful that the next release iOS 6.1.3, takes care of the issue.

For the most part, iOS 6.1.2 seems to have silenced the issues that most were having with Exchange after the iOS 6.1 update but it does appear that at least some users are still experiencing issues.

It appears that Apple has its work cut out for it. Already, the company has promised a fix for the first security flaw, but it’s unclear if the next update, iOS 6.1.3, will tackle the other issue as well.

In addition, it appears that at least some iPhone users are still experiencing issues with Exchange which places even more importance on the iOS 6.1.3 update.

The release date of iOS 6.1.3 remains unclear however. Apple does not give out release dates for incremental iOS updates and thus, the update could roll out unexpectedly at any time.

Hacker David Wang, known as @PlanetBeing, believes that it could be a month or more before Apple delivers iOS 6.1.3, an update that many iPhone owners are hoping take care of their lingering iOS 6.1. issues.

iOS 6.1.3 also looks like it will patch up some other bugs in iOS 6.1.3, namely, the bugs that hackers have used to provide the Evasi0n jailbreak tool to iPhone owners on iOS 6 and above.