The long-awaited iOS 6.1 update for iPhone, iPad and iPad touch is now available to owners that have been waiting for weeks on end wondering when Apple’s first major iOS 6 release might roll out.

The update, which seemingly rolled out in iOS 6.1 GM form over the weekend under the flag of iOS 6.1 Beta 5, is now available to owners of Apple’s mobile devices either through iTunes or Over-the-Air. Those looking to avoid wires will want to head into the device’s Settings, into General, and then Check for a software update. 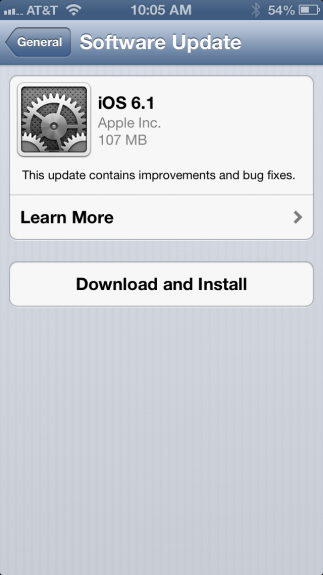 iOS 6.1, which is 107MB, should be ready to download and install. The update process shouldn’t take too long though given its size, owners of the iPhone, iPad and iPod touch will want to set aside a few minutes to install the software.

The changelog is relatively small for such a big update but includes LTE support for more carriers, the ability to purchase movie tickets through Fandango – a feature that is only found in the United States at the moment and the ability for iTunes Match users to download individual songs from iCloud.

Apple doesn’t go into an extensive list of bug fixes but we imagine that some of the lingering bugs from iOS 6.1, iOS 6.0.1 and iOS 6.0.2 will likely be taken care of by this update. It’s also entirely possible that the new software will introduce new bugs as well though both remain to be seen. 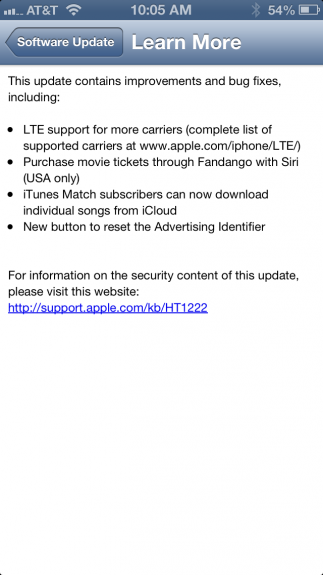 Fortunately, it appears that those observations were right on the money and the full update is now available to those that wish to download it and move their iPhone, iPad or iPod touch from iOS 6.0.2 to iOS 6.1.