Apple has not officially said what it will be showing off at this year’s WWDC 2012 but an iOS 6 announcement at the conference is now confirmed.

MacRumors has posted a photo of workers putting up an iOS 6 banner at the Moscone Center in San Francisco, the venue where Apple will be hosting the conference starting Monday, June 11th.

iOS 6 has heavily been rumored to be the centerpiece of Apple’s WWDC 2012 keynote on Monday and it appears that those rumors will wind up becoming a reality. 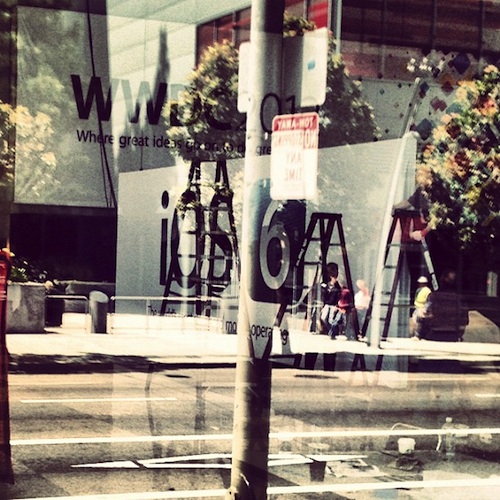 To date, Apple has only said that it would be discussing the “future of iOS” and that again, appears to be iOS 6, which will replace iOS 5, the operating system that Apple announced at the last WWDC and released alongside the iPhone 4S in October of 2011.

iOS 6 has seen its fair share of leaks in recent days with several of its purported features rising to the surface ahead of Apple’s conference.

The software is also rumored to include Facebook integration much in the same fashion as Twitter in iOS 5. The other big feature is rumored to be Siri for the iPad.

Currently, Siri, the virtual personal assistant, is only available on the iPhone 4S.

Apple is also rumored to be announcing several other things including OS X Mountain Lion, new Macs – MacBook Pros with Retina Displays and a new MacBook Air are rumored – and Apple TV applications.